Thomas Muller, shown in a highlights video from the 2010 World Cup above, is the star player of the German national team and the biggest threat to all those who face off against him.

Here’s what you need to know about the talented striker:

1. He Had a Hat Trick in the First World Cup Game

Muller managed to score a hat trick during Germany’s first World Cup game against Portugal on June 16. His hat trick was the 49th in World Cup history. He was headbutted by Portugal’s Pepe during the same game, who was subsequently red carded for his actions. Muller’s achievements in the first game earned him the title of player of the game.

2. He Had to Get Stitches After Germany Faced Ghana

Muller’s collision with Ghana center John Boye left him in need of stitches after the match on June 21. Muller was shown on the field bleeding profusely, but after getting stitches, said everything with him was fine, even if he did, “look a little like a boxer.” He said the injury would not stop him from taking the field against the U.S. on June 26 and showed fans he was okay in the tweet below:

3. He Has Played for Bayern Munich His Entire Pro Career

Muller signed with Bayern Munich in 2009 after spending a year on the club’s reserve team. During his first year as a starter for Bayern Munich in 2010, he helped Bayern Munich secure the national title when the team faced off against Hertha BSC. He was voted by fellow professionals as the best newcomer of the 2009-2010 season and was named in the Bundesliga team of the season. Muller credited coach Thomas Van Gaal with his stellar success.

4. This Is His Second World Cup

Muller made his World Cup debut in 2010, scoring 5 goals and three assists. His performance earned him the Golden Boot and Best Young Player of the Year awards. During this year’s World Cup, German manager Joachim Low said Muller, “is a very unorthodox player and you can’t really predict his lines of running, but he has one aim and that is ‘how can I score a goal?'”

Muller married long-time girlfriend Lisa in December 2009 after being engaged for two years. Muller proposed to his wife at his parent’s home on Christmas Eve, 2008. Lisa Muller is a model. He grew up in Upper Bavaria and has a younger brother named Simon. Muller is an ambassador for YoungWings, a charity that helps children who have suffered significant trauma. 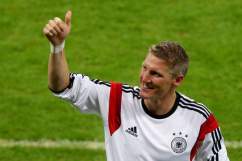 Loading more stories
wpDiscuz
3
0
Would love your thoughts, please comment.x
()
x
| Reply
Germany's Thomas Muller has garnered a lot of attention during the 2014 World Cup for his impressive hat trick against Portugal and stitches scare after colliding with John Boye of Ghana.