Timmy Chandler,the son of an American serviceman and a German mother, is playing for the U.S. national team after growing up in Germany.

Chandler’s one of the eight defenders on the U.S. World Cup Team. According to his U.S. soccer bio page, he’s shown considerable versatility by acting as a left or right-side flank defender. After the World Cup, Chandler will return to his German team as a regular starter.

2. He Plays for Eintracht Frankfurt

3. He Trained in Eintracht’s Youth Academy

According to SB Nation, Chandler rose through the ranks of Eintracht Frankfurt’s youth academy, but hadn’t made it to their senior team until June 2014.

4. He’s Given off the Impression he Doesn’t Want to Play for the United States

According to Ives Galarcep of Fox Soccer, Chandler has turned down two U.S.-mens call ups in two years, signaling he isn’t interested in playing for a U.S. team. Galarcep said Chandler comes off as non committal, writing:

[He’s] a player who is either more concerned with his club commitments than his national team commitments, or worse yet, a player who still has one eye on playing for Germany while he tries to keep the United States waiting.

In an interview with Goal.com, Chandler talked about how he doesn’t like to fly, which may provide some insight as to why Chandler hesitated to fully commit to the U.S. National Team, which has to fly a lot for games. Chandler told the site: 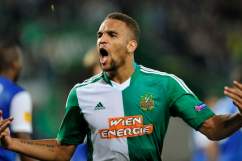