The father of Las Vegas cop killer Amanda Miller says he never wanted his daughter to marry Jerad Miller, who he says brainwashed his daughter into becoming an anti-government radical whose hatred for authorities drove her and her husband to kill two cops and a civilian on Sunday.

Todd Woodruff, a native of Lafayette, Indiana, called Amanda his sunshine, and told the Los Angeles Times, “That son of a bitch took my sunshine. He ought to be glad he’s dead or else I’m chasing him down,” referring to Jerad Miller.

Here’s what you need to know about Woodruff:

1. He Was Sick to his Stomach the day Amanda and Jerad Married

In an interview with the Los Angeles Times, Woodruff said he never liked Jerad Miller, but tolerated him because his daughter loved him. The day of the wedding, Woodruff’s disdain for Jerad Miller proved to be too much. He said:

I didn’t even want to be there. The only reason I was there was because I wanted to walk my daughter down the aisle for the first time. But I puked my head off in the bathroom beforehand because I so didn’t want her to marry him.

2. He’s a Big Fan of the City of Lafayette & Its Government

In a letter to the editor published January 9 in the Lafayette Journal & Courier, a man identified as Todd Woodruff from Lafayette raved about the job city crews did plowing the streets following a snow storm.

The letter expresses sentiments entirely at odds with the anti-government fervor that cops say consumed Jerad and Amanda Miller’s lives.

In the letter, he calls Lafayette a “great city to live in” and praises Mayor Tony Roswarski, his schoolmate at Sunnyside Junior High School.

What a great city to live in. I, like almost all of us, did not venture out until Tuesday. What I found impressed me enough to write.

All the roads had been plowed, though icy. Not just a pass through, but almost as wide as the streets. There wasn’t a stranded car in sight and no traffic. My hat is off to Mayor Tony Roswarski, who I went to Sunnyside Junior High School with, and all the road crews, police and everyone. We all came through unscathed, and now we can go out safely.

I am proud of you, Lafayette. That’s why I have always came back home, because we have the best people, best services, best everything right here in central Indiana. Continue to watch our neighbors, friends and family over the next few days and years.

3. Jerad Miller Cut Amanda off From her Family

Todd Woodruff told the Los Times that Jerad Miller cut Amanda off from her family. He said:

The photo above shows a picture Todd Woodruff posted to his wall of Amanda Miller as a toddler. The Los Angeles Times reports Woodruff and Amanda Miller spoke on Friday night and, according to Woodruff, everything seemed fine.

Woodruff said Amanda Miller was a compassionate and caring teen, who once made him drive to a neighboring town to help an injured bird, the Times reports. She was a “solid” student in high school and even played the violin.

5. Woodruff Said Jerad Miller’s Family Wanted Nothing to do With him

According to Woodruff, Jerad Miller thought the entire world was out to get him and he had no connection with his family. Woodruff told the Times:

The whole world was against him and he was just, he was just nuts. He got kicked out of his family’s house, they wouldn’t talk to him, it was just that far out 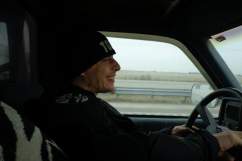