The 114th U.S. Open is here again, bringing together the top golfers in the world to compete against each other. The U.S. Open is golf’s second Grand Slam tournament of the year starting this Thursday with the final round being played on Sunday. Watch the video above for a preview of the course and players.

Here’s what you need to know about the PGA’s 2014 U.S. Open Championship:

1. Pinehurst is Hosting It

The 2014 PGA U.S. Open Championship will take place at the No. 2 course, the most famous of the 7 courses at the Pinehurst Resort in Pinehurst, North Carolina. The historically celebrated golf course has hosted more single golf championships than any other course in the United States.

After serving as the site for both the Women’s and Men’s Championship this year, Pinehurst will be marked in history as the first one to have host both one week after the other. The course will play at 7,562 yards (par 70) for the men and 6,649 yards (par 70) for the women, making it the third longest course in U.S. Open history.

Pinehurst was deigned by architect Donald Ross, who built the courses with signature touches such as the famous turtleback greens that haunt every golfer’s dreams by creating the toughest pin placements possible.

Pinehurst Resort owners Bill Coore and Ben Crenshaw, recently had No. 2 restored to its original rustic look. In doing so, sandy areas now replace the rough that are covered in small bushes and natural vegetation. The process removed 35 acres of sod and 700 sprinkler heads of the 1,150.

The U.S. Open consists of 4 days, 18 holes were day to total 72 holes starting Thursday, June 12th and finishing up on Sunday, June 15th.

The tournament will be broadcast on NBC Sports, ESPN and the Golf Channel.

3. Tiger Woods Will Not Be Playing

All fans have a love/hate relationship with golf’s former No. 1 in the world (now No. 4) and No. 1 celebrity in the game, Tiger Woods. No one can deny the excitement the intemperate ex sex-addict puts into the game. Much to everyone’s disappointment, Woods will be sitting this one out due to his back surgery on March 31st which he hasn’t completely recovered from.

There has been a lot of buzz around the impact Tiger’s absence has had on the sport and what the future holds when Tiger is done for good. After missing the first two major championships, these questions have caused a lot of anxiety within the golf industry.

Although the Masters was viewed as a great success in regards to having an exciting match thanks to Bubba Watson and Jordan Spieth’s extremely close round on that Sunday, the Masters’ ratings were the lowest they’ve been in 11 years.

Tiger changed the landscape of golf and how people viewed it. He’s an important part of this game and you feel it when you’re out there. He’s a force.”

At Augusta, it looked different, felt different from when he is there. I just didn’t see as many fans.”

4. Rory McIlroy is the Favorite

McIlroy is the 2011 U.S. Open Champion, giving him a leg up in the odds. He has been on fire lately despite his personal life being on the rocks after breaking off his engagement with longtime girlfriend and tennis star, Caroline Wozniacki. Days after the breakup he went on to win the BMW Championship, giving him momentum going into the U.S. Open. This will be McIlroy’s first time competing at Pinehurst. Watch the video above to hear McIlroy’s plan for the U.S. Open this year.

Phil Mickelson is also considered a top three contender despite his inability to capture a U.S. Open, which is the only major holding him back from capturing a Grand Slam sweep, along with only 5 other players in history. However, Phil has not won a tournament in 11 months. The only reason Phil has been sticking out in the past year are because of the headlines connecting him to an insider trading investigation.

After wining the Masters, Bubba Watson is the only player with a chance of a winning a calendar Grand Slam and is predicting to perform extremely well this coming weekend. Watson’s record for the year thus far are two wins and three runner-up finishes in Doral, Phoenix and the Memorial.

Click here to see an analysis of the odds and projected favorites.

5. Five Extra Players Were Added to the Field

Kevin Na along with four others slipped into the field of 156 players that made the cut to compete in the 2014 U.S. Open. Na got in due to his ranking at No. 40 in the world and will now be making his fourth U.S. Open start, with his best finish at this tournament a T-29 at Olympic Club in 2012.

Five potential spots are being held within the field not including three alternates from the sectional qualifying that were added.

Cameron Wilson, NCAA individual medalist from Stanford, Craig Barlow and Brandon McIver from the University of Oregon managed to get into the field at Pinehurst No. 2 to total 156 players in the tournament. 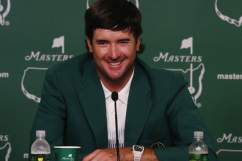 Loading more stories
wpDiscuz
0
0
Would love your thoughts, please comment.x
()
x
| Reply
The 114th U.S. Open Championship will start on June 12 at PInehurst No. 2 Golf Course. Here's what you need to know about the tournament.