Although the U.S. fell to Germany, they were able to stand their ground with only a 1-0 loss and will be advancing into the round of 16 in the World Cup.

Luckily Portugal beat Ghana to keep them from scoring any points in Group G to move ahead of the USA. Thanks Ronaldo.

Read below to see the recap and highlights of the match:

Germany Threatened the U.S. Early On

US goalkeeper Tim Howard (C) saves a ball during a Group G football match between US and Germany. (Getty)

I can tell the ending stats for USA vs Germany. Ball Possession: USA 2%, GER98%

Forget about fix. Germans are out for blood. Totally different skill level. Germany is NHL and USA is AHL!!!! Poise and skill vs chaos!!!

As Germany attacked the US back-line relentlessly in the first 20 minutes of the game, USA goalkeeper Tim Howard kept the USMNT alive as he made save after save from Germany’s powerhouse offensive line.

Howard with the nice save. Things looking a bit shaky to start for #USMT. #USAvsGermany http://t.co/SwqXUUoHT0

Graham Zusi Took the First Shot On Goal For the USA

After getting dominated by Germany for the good part of the beginning, Zusi took a shot after Jermaine Jones handed the ball off on a counter-attack, but it went wide right over the goal.

Jermaine Jones Collided With the Ref

One of the USMNT’s German-Americans Jermaine Jones collided with the ref in the 29th minute of the game, but at least it showed the USA was finally waking up and putting pressure on Germany.

Jermaine Jones. The referee and the ball have been beating him up today. #USMNT #USA

Omar Gonzalez Got a Yellow Card

Gonzalez was penalized for his tackle on Bastian Schweinsteiger in the 38th minute of the game.

Yellow card for Omar Gonzalez for the professional foul on Bastian. The #LAGalaxy man has been steady so far. #USAvGER #USA

USA’s Omar Gonzalez prevented the Germans from scoring by putting a header on a Jerome Boateng’s cross to cause the ball to fly over the net in the 47th minute.

Tim Howard made a valiant save on Per Mertesacker’s header attempt, but he pushed it out to Germany’s striker Thomas Muller, who put it in the far post and out of the reach of Howard in the 55th minute. 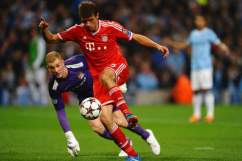 Kyle Beckerman Got a Yellow Card

Beckerman was given a yellow card in the 62nd minute after a push on Germany’s Bastian Schweinsteiger.

For the second time Jermaine Jones was taken down by a non German. Jones and teammate Alejandro Bedoya of the USA collided on an important offensive play on the German goal for the Americans. Jones waled off the field with a bloody nose in the 74th minute.

Luckily, neither were seriously hurt.

This game had one of the juiciest back stories of all time.

This game was not the end for the Americans and we can only hope that the two teams will met again later.

And don't forget to wear your jersey !! #businessattire RT @ussoccer: Need note to get out of work Thurs? #LetsDoThis pic.twitter.com/fa49OKM0hu

We're comin' flags wavin' and guns blazin', with 50 Stars, 13 Bars and a shitton of freedom. Merica.

If Germany seems a bit tired, thank the American fans who chanted outside their team hotel until the cops came: http://t.co/wIdptC3e40 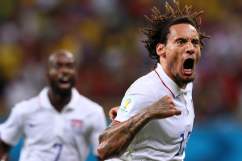 Loading more stories
wpDiscuz
1
0
Would love your thoughts, please comment.x
()
x
| Reply
The U.S.A. fell to Germany 1-0 loss, but will still be moving into the round of 16. Here is the recap and all of the highlights you need to see.