The United States and Portugal are about to square off in one of the most-watched and most-bet-on games of the World Cup.

Here’s how the oddsmakers are sizing up the game:

2. Cristiana Ronaldo Is the Most Likely Goal Scorer

Despite being hobbled by a knee injury, Portuguese superstar Cristiano Ronaldo is the best bet at Paddy Power to score a goal.

Paddy Power is offering odds of 4/7 that Ronaldo will score a goal at some point during the game and 13/5 that he’ll score the first goal.

The oddsmaker has two of Ronaldo’s teammates — Eder and Nani — as the next most likely goal scorers. Eder is at 21/10 to score and 7/1 to score first, while Nani is at 5/2 and 8/1, respectively.

Despite Portugal having already lost a match in group play and the U.S. coming in unbeaten, Paddy Power lists the U.S. as a 150/1 longshot to win the tournament, while Portugal is at a much more modest 40/1.

Brazil is the favorite to win the tournament at 10/3, followed by Germany at 7/2 and Argentina at 4/1. The longest shots in the field are Iran and Honduras, both of whom have odds of 1,000/1 at Paddy Power.

5. FivethirtyEight Has the Game As a Virtual Toss-up

Get up to speed before tonight's big #USA–#POR game. Read our Crib Notes: http://t.co/2zsTzMEHZo #WorldCup pic.twitter.com/7rKGYhGmL4

The probability gurus over at Fivethirtyeight give the U.S. a better shot at winning than most oddsmakers.

Check out a gallery of the full U.S. roster here. 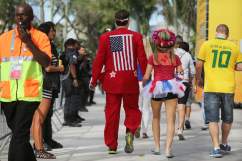 USA vs. Portugal: The Tweets You Need to Read

Read More
Soccer, Sports, USMNT, World Cup
Follow News ↓
Vegas is getting a ton of action on tonight's USA-Portugal World Cup game, and we've got all the betting information you need.