It was a stressful, emotional, battling victory for Jurgen Klinsmann’s team. After a dream start from Clint Dempsey, who scored just 34 seconds in, Ghana slowly came back. When Andre Ayew finally scored for Ghana, a United States win seemed improbable.

Nobody told John Brooks that, as he powered in Graham Zusi’s corner just minutes after Ghana had taken the lead.

Here’s how it went down in Natal:

In Just His Fifth Appearance, John Brooks Was the Hero

With Ghana heavily pressuring the U.S. defense after Andre Ayew scored their equalizer. The U.S. mustered a quick counter attack which resulted in a corner kick. It was substitute Graham Zusi who took it. His delivery was met by the head of fellow sub John Anthony Brooks who powered it in. There was no chance for Kwarasey in the Ghanian goal. There was agony for the U.S. fans during the game but Brooks’ moment of magic was sheer ecstasy. It was only John Brooks fifth appearance for the U.S. His first goal and the first goal scored by a U.S. substitute at a World Cup game.

Clint Dempsey Rose to the Challenge

Taking over from Landon Donovan as the U.S. marquee soccer player, the pressure was on Clint Dempsey. He rose to the challenge in the best way possible. With just 34 seconds gone he latched on to a long punt and beautiful rounded two Ghanaian defenders but placing a sublime finish under Kwarasey. An unbelievable start to an amazing evening.

Amid the joy and ecstasy, we have to remember that the U.S. team spent most of the 90 minutes defending. It was a commanding performance from Tim Howard in the U.S goal that helped keep Ghana at bay. There’s also huge credit deserving to the U.S. midfielders like Kyle Beckerman who came back constantly to help the cause.

It was bizarre that Kevin Prince Boateng didn’t start for Ghana, because when he came on after 59 minutes he completely changed the game, helping to set up Andre Ayew’s equalizer. Ultimately there was a lack of disicpline from some Ghana’s key players, especially Sulley Muntari. The former Inter Milan midfielder took it upon himself to hit wild shots when Ghana had good possession. Something that Tim Howard was loving.

The U.S. Team Is Not Healthy

It can’t be bad luck that the U.S. players seemed to be dropping like flies during the game. First Jozy Altidore seemed to tear his hamstring in almost violent fashion. Then as the game wore on, Matt Besler and Alejandro Bedoya also pulled up clutching their hamstrings.

This is the first game of the World Cup and the U.S. looked like it was playing in a semi final. Defending deep, it was only occasional bursts of energy from players like Fabian Johnson and Michael Bradley that kept the ball in Ghana’s half late on. Obviously you can’t blame anyone for Clint Dempsey’s nasty injury:

Can the U.S. Go Through?

Let’s not get too excited, despite the wonderful win, the U.S. still has an uphill struggle to try to get through to the last 16. Portugal were hammered today by Germany so surely Cristiano Ronaldo will be out for revenge when they meet the U.S. on June 22 in Manaus. The U.S. will have to avoid defeat in that one and hope Germany beat Ghana. That way, the German team will have qualified, meaning they might rest some players for the final game, possibly allowing for a U.S. tie or win and sending Klinsmann’s team into the second round.

Here’s how the teams lined up from the start: 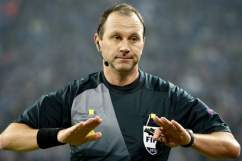