The heartbreaking story of a 3-year-old girl being kicked out of a KFC in Mississippi for the facial scars she sustained after a pit bull attack has been called a hoax, new reports claim. Victoria Wilcher was never in the KFC in question and her grandmother allegedly fabricated the incident to drum up funds to cover Wilcher’s staggering medical expenses, according to multiple reports.

1. Wilcher and Her Grandmother Were Never Seen on Store Surveillance Footage

Wilcher’s grandmother, Kelly Mullins, claimed the incident took place May 15. But the Laurel Leader-Call, citing anonymous sources, reported that store surveillance footage shows no one fitting Mullins’ or Wilcher’s descriptions in the store that day. Also, Mullins told various media outlets she ordered a large sweet tea and mashed potatoes for her granddaughter. But the store has no record of either of those items being ordered, either as a standalone order as part of a larger order.

Victoria’s Victories, the charity Facebook page created by Wilcher’s aunt, Teri Rials Bates, promised supporters their story wasn’t fabricated, saying that KFC hasn’t released a statement about the investigation and cautioning people not to believe everything they’re seeing and reading. This comes after the page inspired people to boycott KFC restaurants and publicly shamed KFC on Facebook for denying service to Wilcher. National media outlets, including CNN and The Today Show covered the controversy as it gained traction online.

3. The Family Received More Than $135,000 in Donations After the Story Went Viral

After her story went national, the GoFundMe page made to benefit Wilcher raised $135,505 to cover her medical expenses. Dr. Frank Stile, a plastic surgeon in Las Vegas, offered to perform Wilcher’s reconstructive surgeries for free after seeing her story. KFC pledged to donate $30,000 to cover Wilcher’s medical expenses and has said they will honor that promise, regardless of whether the story proves to be false.

According to the Laurel-Leader Call, Teri Rials Bates, Wilcher’s aunt and the administrator of the Victoria’s Victories pages, originally misidentified the store as being on State Street in Jackson, Mississippi. Not only is that the wrong store, but the State Street KFC location has been closed for several years. She later addressed the error on the Victoria’s Victories page, saying, “Im the Aunt, I run her page and Im the one that miss quoted that it was State street when it was actually Woodrow Wilson. Dont blame the grandmother for my mistake!”

5. The Store Caters to Patients at Baston Children’s Hospital Regularly

According to the Laurel Leader-Call, the KFC in question serves hospital patients regularly due to it’s proximity to Baston Children’s Hospital, part of the University of Mississippi’s medical system. The source said:

We have never ever ever run off anyone, and we have seen some really really sick people come to the restaurant from the hospital. We’ve had people come in who were shot in the face. We’ve had them with tubes and wire sticking out. We never have asked anyone to leave.

A KFC employee told the paper that he just started wearing his KFC shirt out in public on June 20. 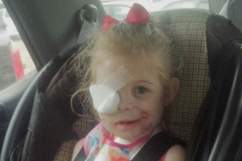 Read More
5 Fast Facts, Children, Mississippi
Follow News ↓
The story of Victoria Wilcher, the 3-year-old girl asked to leave a KFC in Mississippi because her facial scars were disturbing other customers, has been called a hoax after the KFC franchise in question hired a private investigator.