In a historic ruling that could deliver a major financial hit to the Washington Redskins, the U.S. Patent and Trademark office ruled today that the team’s trademarks must be canceled because the “Redskins” name is disparaging to Native Americans.

The organization, which has come under intense criticism for its use of the decades-old nickname, can appeal the ruling and will be able to use its trademarks while the appeal is pending.

If the ruling is upheld, other people and organizations will be able to use the Redskins name and logos on merchandise without fear of legal action, dealing a major financial hit to the embattled organization.

1. The Office Ruled that the Name is ‘Disparaging’ to Native Americans

By looking at historic definitions and public uses of the word, as well as similar cases against high school mascots, the board found that the term was widely recognized as a disparaging and offensive term.

Read the full text of the ruling below:

A bevy of high school and college teams have changed their nicknames over the past four decades after coming under criticism from civil rights groups, including St. John’s (Redmen), Miami of Ohio (Redskins) and Stanford (Indians). Several prominent colleges still have Native American-themed nicknames, including the Florida State Seminoles and Illinois Fighting Illini.

There are six other major league pro sports teams whose names are derived from Native American themes: The Cleveland Indians, Atlanta Braves, Kansas City Chiefs, Golden State Warriors and Atlanta Hawks. The Hawks were founded as the Tri-City Blackhawks but later shortened their name to the Hawks and use a bird, rather than a Native American, as their mascot. The Warriors no longer have a Native American-themed logo.

Wikipedia has a full list of mascots derived from indigenous peoples.

2. 5 Native Americans Had Appealed to the Office

The appeal was brought before the United States Patent and Trademark Office by Amanda Blackhorse, Marcus Briggs, Phillip Gover, Jillian Pappan, and Courtney Tsotigh, all identified in the official decision as Native Americans.

3. The List of People Calling for the Redskins to Change Their Name is Growing

Bailey, a respected veteran who now plays for the New Orleans Saints, compared the name to the “N word.”

When you hear a Native American say that ‘Redskins’ is degrading, it’s almost like the N-word for a black person. If they feel that way, then it’s not right. They are part of this country. It’s degrading to a certain race. Does it make sense to have the name?

I don’t know where the name came from or how it came about, but the bottom line is that it’s still here in this day and age, and it makes no sense to have it. I love that organization, but when it starts peeling off old scabs and people are pitching a fit about it because it’s degrading to them, then you’ve got to make a change.

4. An Anti-Redskins Commercial Aired During the NBA Finals

Above you can watch the powerful commercial, which was sponsered by the Yocha Dehe Wintun Natino of northern California, and aired during the NBA finals in June 2014.

5. Owner Daniel Snyder Has Vowed to Keep the Name

In April 2014, the team’s owner Daniel Snyder said that the team’s name was, “not an issue.” He said, “The real issues are real-life issues, real-life needs, and I think it’s time that people focus on reality.”

He insisted he would not change the name because it was a, “badge of honor.” 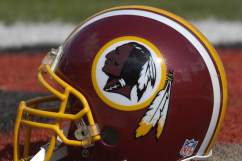