Gun control advocacy group Evolve has released a video designed to be an eye-opening conversation starter on gun control. Evolve wants you to lock up your guns just as you would lock up your sex toys.

While the ad takes a fresh approach to a serious issue, it is in questionable taste. It compares a mother’s embarrassment about her unmentionables to the gun death of a child. Not locking up guns properly leads to more than 100 accidental child deaths per year in the United States. 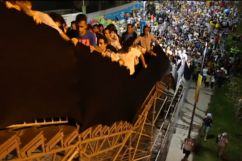