Abigail Hernandez was last seen leaving her high school in Conway, New Hampshire, back in October 2013. On July 19, she was found, alive and well, and returned to her family, reports WCVB. Nobody knows where she’s been since October.

1. She Went Missing While Walking Along Her Regular Route Home

Somehow on October 9, Hernandez never made it home as she walked her regular route to her house from Kennett High School. Between 2:30 p.m. and 3:00 p.m., she sent texts to friends. After 3:00 p.m. that day, she wasn’t seen again until July 20. 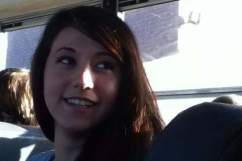 Abigail Hernandez Photos: The Pictures You Need to See

It hasn’t been announced where Hernandez has been all this time. A police statement said “The facts and circumstances surrounding Abigail’s disappearance continue to be investigated.” On the Bring Abby Home website, it’s written that Hernandez did not have a history of running away. In November, cops got a letter from Hernandez, it led them to believe that she was being held against her will somewhere. CBS Boston reported in December 2013, that the letter had been received on November 6 but postmarked on October 22. The FBI special agent in charge of the search, Kieran Ramsey told the media:

When we received this letter, I will tell you it was unprecedented. We have not seen anything like that in recent times in other investigations. But most importantly, it gave us hope.

When she disappeared she had no money, identification, or clothes other than what she was wearing.

3. Her Mother Said ‘We Are the Happiest People on Earth’

Hernandez’s mother, Zenya, said in a statement “Today we are the happiest people on earth.” New Hampshire Attorney General Joseph Foster said the Hernandez family “has requested privacy as they assist with the law enforcement efforts and as they spend time supporting and caring for Abigail.”

In May 2014, it was reported that there was a $60,000 reward for information that would lead to finding Hernandez. Abigail Hernandez’s father, Ruben, contributed $30,000 to the fund. He said at the time that he would offer $30 million if he could have.

Abigail Hernandez Photos: The Pictures You Need to See

Read More
5 Fast Facts, Amber Alert, Breaking News
Follow Heavy ↓
15-year-old Abigail Hernandez was last seen on October 2013, on July 19 she was reunited with her parents. Where was she?