An Algerian airliner carrying 116 people crashed Thursday after falling off radar and disappearing, marking the second commercial aviation disaster in as many days and the third in just over a week.

1. The Plane Crashed in Mali, But Is Still Not Found

The BBC reported that the plane presumably crashed between Gao and Tessalit, two towns in Mali near the Niger border.

French broadcasting company BFMTV says the French military found debris from the flight in the Tilemsi region. However, despite these initial reports, on Thursday evening a UN spokeswoman from Mali confirmed to BNO News that the plane had not yet been located and that the search would have to resume on Friday.

On Thursday afternoon, French President Francois Hollande told the media that France would be using all its military means to track down the missing plane.

2. It Disappeared 50 Minutes After Taking Off in Burkina Faso

The plane, a twin-engine McDonnell Douglas MD-83, was carrying 110 passengers, four crew members and two pilots. It took off from the Burkina Faso capital of Ouagadougou at 1:17 GMT and was scheduled to land in the Algerian capital Algiers at 5:10 GMT. It disappeared 50 minutes after takeoff.

3. France Dispatched 2 Fighter Jets to Look for the Plane

French fighter jets have joined the search for the missing plane. A spokesperson for the French Army told Rueters that two French Mirage 2000 jets were scrambled from their base in Africa and will begin searching. Around 2,000 French soldiers have been stationed in Mali fighting an Islamic militant insurgency since January 2013.

The BBC reports that neither the al-Qaeda-linked combatants in Mali, nor the Ethnic Tuareg separatists have the capability of shooting down a plane.

The flight carried some 50 French citizens.

4. The Plane Requested a Route Change After Encountering Severe Weather

There are reports that the plane was encountering severe weather and had requested a route change. The BBC reports that this weather may also cause a delay in UN rescue workers currently stationed in Mali.

5. It’s the Latest in a String of Recent Airline Disasters

The tragedy comes a week after the shooting down of Malaysia Airlines Flight 17 over Ukraine, which killed all 298 people onboard. It comes one day after a TransAsia Airways passenger plane crashed in Taiwan, killing at least 48 people.

And it comes in the same year that, on March 8, Malaysia Flight 370 went missing while carrying 239 people on a flight from Kuala Lumpur to Beijing. No pieces of the aircraft or passengers have ever been recovered. 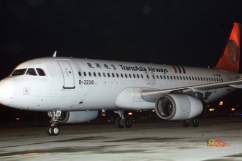 Loading more stories
wpDiscuz
0
0
Would love your thoughts, please comment.x
()
x
| Reply
Air Algerie Flight 5017 carrying 110 passengers and 6 crew fell off the radar and crashed. "We have lost contact with the plane."