Fan sleeps in stands during game vs. Red Sox4/13/14: A fan in the stands takes a snooze during the 4th inning of the Red Sox/Yankees game at Yankee Stadium Check out http://m.mlb.com/video for our full archive of videos, and subscribe on YouTube for the best, exclusive MLB content: http://youtube.com/MLB About MLB.com: Commissioner Allan H. (Bud) Selig announced on January 19, 2000, that the…2014-04-14T08:28:50.000Z

A 26-year-old Yankee fan is suing ESPN, MLB and the New York Yankees claiming he was mocked by ESPN announcers after he dozed off in the middle of a Yankees-Red Sox game in April.

Andrew Rector is seeking a staggering $10 million in damages. He claims the unflattering footage of him asleep, shown in the video above, caused him intense emotional distress, especially after announcers supposedly mocked his physique.

1. There’s Disagreement Over What Was Said in the Broadcast

The lawsuit claims the ESPN announcers Dan Shulman and John Kruk called Rector names like “fatty” and “unintelligent,” which were then broadcast around the world. However, if you listen to the video above, Shulman (pictured left) and Kruk (pictured right) don’t say any of the insults listed in the suit.

You can read the entire complaint here:

2. His Mom Defended the Suit’s Credibility

Soooo Andrew Rector is embarrassed about film of him sleeping at a Yankees game so he sues to get in the media EVEN MORE?! #notsmart

In an interview with the New York Post, Andrew Rector’s mother, Hana, defended her son’s lawsuit, saying, “it should send the message that idiots need to stay out of people’s business and not make fun of people who are harmless.” Rector’s lawyer, Valentine Okwara, told the Post, “we’ll settle this in court.”

3. Rector Has Left the Country

This Yankee fan may sue me for posting this! He's suing everyone else for sleeping at a game. http://t.co/duDTfUIlyN pic.twitter.com/bzPYXESGHG

In an interview with The New York Times, Hana Rector said her son had left the country. She said the public scorn her son endured caused him to miss work and that, “everyone made fun of him everywhere he went.”

4. The Defendants in the Suit Have Declined to Comment

5. Bad Things Tend to Happen to Fans Who Sleep at Games

Yankee Cup StackFan falls asleep at a Yankee game only to become a section 231 legend. New standing record is 3 full size souvenir cups standing for at least a 3 count. In order to beat record, at least one participant must be passed out and unaware of the cup stack. Good luck to all who take…2011-04-03T21:30:42.000Z

As Fox Sports pointed out, Rector isn’t the first fan to be mocked after falling asleep during a Yankee game. The video above, taken at a Yankees game in 2011, shows an entire section of Yankee stadium laughing at a sleeping fan who unwittingly became part of a cup-stacking challenge. The description of the video reads as follows:

Fan falls asleep at a Yankee game only to become a section 231 legend. New standing record is 3 full size souvenir cups standing for at least a 3 count. In order to beat record, at least one participant must be passed out and unaware of the cup stack. Good luck to all who take part in the cup stacking phenomenon. 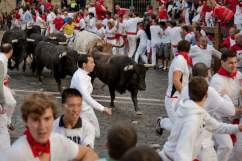 PHOTOS: Revelry & Goring at the Pamplona 2014 Running of the Bulls