A missing Washington state teen who left behind a note that said “if you’re reading this, I am either missing or dead,” was found safe Wednesday, her family said.

The girl, 17-year-old Angelic Dean, left her home in Camas, Washington without taking several important items, including her medications and prescription glasses, cops said. Family members and police later found several troubling items in her personal journal, including the “missing or dead” note. Dean’s family shared photos of her with the hope of bringing her home safely.

1. Dean’s Parents Announced on Facebook That She’d Been Found

Dean’s parents announced on the “Help Find Anji” Facebook page early Thursday morning that their daughter had. They said a vigil scheduled to be held for Dean might go on as scheduled but would be dedicated to other missing children.

“NEWS: We are thrilled to have our daughter back and so thankful she is safe,” they wrote. “Many missing children are not so lucky. Due to the number of people that were expected to attend the vigil for Angi, we are considering still holding the vigil of hope for all the other children still missing that need our voices and prayers.”

2. Cops Said She Was Involved in a Trafficking Operation

According to The Columbian, cops confirmed Dean was caught up in a trafficking operation. Dean’s family had been working with the Vancouver-based National Women’s Coalition Against Violence and Exploitation to help find their daughter. Michelle Bart, president of the organization, told The Camas Washougal Post-Record:

Today’s a good day. Today’s a great day. This doesn’t happen too often. (The coalition) has been to more funerals than happy times like today.

3. She Was Found at a Shopping Mall

A spokesperson for Dean’s family told KGW she was found at the Clackamas Town Center shopping mall in Happy Valley, Ore. around 4 p.m. Wednesday. The mall is only 21 miles south of Dean’s hometown, Camas, Wash.

A woman from Milwaukie, Ore., who only wanted to be identified as Jennifer, spend several hours with Dean at the mall, according to KGW. The woman said Dean told her, “she was in a bad situation and needed to get out,” and asked that Jennifer call her Daisy, after giving the woman her real name.

4. She Told School Employees She Was Involved in Something She Couldn’t Escape

According to KGW, Dean had told teachers and guidance counselors at Camas High School that she was, “in something that she couldn’t get out of.” Dean’s mother, Lynda Jorgenson, told the Camas-Washougal Post-Record she assumed her daughter’s changes in mood were typical of a 17-year-old girl, calling them, “teenage angst,” and “normal teenage girl depression.”

5. She Told Her Boyfriend Someone Threatened to Kill Him and Her Family

Dean told her boyfriend someone was threatening to kill him and her family the day she disappeared, according to KGW. A neighbor told KGW she saw Dean getting out of a light blue, older model Volvo, which was filled with people, hours before she disappeared. Police expressed interest in speaking to a 25-35 year-old African-American male after he was seen dropping Anji off at her home by one of her neighbors. He was driving the blue Volvo. 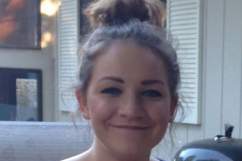 Angelic Dean Missing: The Pictures You Need to See

Loading more stories
wpDiscuz
5
0
Would love your thoughts, please comment.x
()
x
| Reply
Cops in Washington state have found a 17-year-old girl after her disappearance on June 23. Her family found her journal, which was filled with unsettling statements including, "if you’re reading this, I am either missing or dead."