A prominent tech CEO was gunned down today on the 17th floor of a downtown Chicago high-rise by a disgruntled executive who’d recently been demoted.

Steven LaVoie, the 54-year-old chief executive of Arrowstream, is in critical condition after taking bullets to the head and torso during a meeting scheduled by his assailant. The gunman, the company’s longtime chief technology officer, is dead of a self-inflicted bullet wound.

The carnage unfolded this morning at the company’s headquarters in the Bank of America building in the city’s Loop business district.

Here’s what you need to know about LaVoie, his company and his assailant.

1. He Was Shot by His Chief Technology Officer

LaVoie, 54, was shot by a disgruntled employee, company CTO Tony DeFrances, 59, who had just been demoted on July 25.

DeFrances called for a one-on-one meeting with the CEO. During that meeting, he pulled a gun.

There was a fierce struggle, during which LaVoie took two bullets. Then DeFrances shot himself in the head.

What we have here is a workplace violence issue. Apparently there’s a technological company on the 17th floor. They’ve been undergoing a downsizing. They’ve demoted a number of people. … During the one-on-one, he produced a firearm. There apparently was a struggle over the firearm, the CEO was struck twice — he is in grave condition — and then the man took his own life. 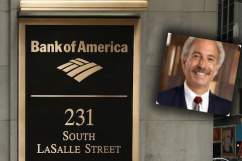 2. He Is in Grave Condition

According to reports, LaVoie was shot in the head and stomach.

He was rushed to a local hospital, where he’s described as being in “grave condition.”

3. Arrowstream Was Voted One of Chicago’s Best Businesses to Work for in 2013

LaVoie holding a meeting at ArrowStream on April 7. (Facebook)

LaVoie is the CEO of Arrowstream, a tech logistics company that provides support to fast food restaurants.

LaVoie founded the company in 2000.

Just over a year ago, the company was named as one of Chicago’s top 100 companies to work for.

In 2010, LaVoie was a finalist for Ernst & Young’s Entrepreneur of the Year Award.

LaVoie’s and his wife, Jody, have three daughters. An online profile for LaVoie states that he graduated from the Yale School of Management and also has a bachelor of arts from the University of California. He’s a native of Sonoma, California.

5. The Disgruntled Shooter Had Worked With LaVoie for 14 Years

There are deep ties between LaVoie and Tony DeFrances, the disgruntled executive who attacked him today.

DeFrances’ company profile, which still lists him as chief technology officer, says he’s worked at the company “virtually since its inception.” LaVoie founded the company in 2000.

Loading more stories
wpDiscuz
5
0
Would love your thoughts, please comment.x
()
x
| Reply
Steven LaVoie, CEO of Arrowstream, was shot by a recently demoted executive on the 17th floor of a downtown Chicago high-rise.