1. He’s Been Accused of Election Fraud

According to The Guardian, Ghani has been accused of election fraud by his opponent, Abdullah Abdullah, after Abdullah’s team allegedly found an audio recording of Ghani speaking with a chief election officer about stealing the election. The conversation was conducted in a crude code, referring to containers of votes as “stuffed sheep.”

2. He Worked at the World Bank and the UN

3. He Has 2 Degrees from Columbia University & Used to Teach at Cal-Berkely

4. He Worked as a Media Correspondent After 9/11

Ghani, featured in an interview with Bloomberg above, took unpaid leave from the World Bank following 9/11 to appear on international news programs including PBS’s NewsHour and programs on the BBC and CNN. He published a book in 2009 called “Fixing Failed States,” which discusses the difficulties in rebuilding governments in struggling territories like Afghanistan, Nepal and Kosovo.

Ghani is an ethnic Pashtun, meaning he is a member of Afghanistan’s largest ethnic group. According to the New York Times, Ghani has promised the release of more prisoner’s in America’s prison in Afghanistan, saying, “We will not allow prisoners to be used as a business commodity.” Ghani was seen as a, “pro-Western intellectual” but has appealed to a sense of Afghan pride in his campaign. 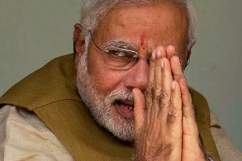