Brazil’s newcomer Bernard is replacing Neymar on the front line after a fracture to his vertebrae during the quarterfinals of the World Cup. Watch the video above to see some of his best highlights.

Here’s what you need to know about the young talent:

1. He is Replacing Neymar in the World Cup

Neymar was deemed unable to play in the remainder of the World Cup due to a fractured vertebra after taking a knee to the back against Colombia in the quarterfinals. Bernard, a 21-year-old first time World Cup player on the squad was chosen to replace the brilliant Neymar on the front line. Watch the video above to see Colombia’s Zuniga take out Neymar.

Bernard’s teammate Maicon will be replacing another of Brazil’s best players and their captain, Thiago Silva in the semifinals. Silva was suspended after receiving a second yellow card against Colombia that suspended him for the next game.

2. His Height Caused Obstacles in His Career

Bernard played his whole youth career for Atletico Mineiro starting in 2006. During his 4 years in the youth league, he was taken out of the squad two times because of his small 5 feet 4 inches stature, but was eventually called up to the first team squad as a professional at the age of 17 in 2010 under Atletico Mineiro manager Dorival Júnior.

After playing at Atletico for his first 3 years, he was looking to transfer, but was only offered a contract from Shakhtar Donetsk in 2013 and ended up taking the deal.

3. He Was Transferred to Ukraine’s Shakhtar Donetsk for $34 Million

Bernard signed a 5-year contract for $34 million with Ukraine’s Shakhtar Donetsk in August of 2013.

Due to the violent 2014 Ukrainian Revolution taking place in the country, Bernard is looking to switch teams if the revolution worsens.

4. He Does Charity For Cancer Research

Bernard is very active on social media and promotes donations towards cancer research. He posted the instagram of a girl with cancer that needed funding and captioned the photo:

Friends, this case is extremely urgent and of utmost importance. Our friend Danielle de Oliveira Pedrosa is 16 years old with a rare brain tumor called chordoma clivus. The range for chordoma treatment is based proton radiotherapy – Proton Bean qdo the tumor lies in a deep place where traditional radiation therapy does not work. This treatment is available at the Massachusetts General Hospital in Boston, Detroit, Oklahoma, Florida and California. The treatment costs of 50 to 100 thousand dollars and Dani need to do this 30 radiotherapy sessions, we only have a month to arrecadarmos this money. Who can help with any amount you can people, will be of great value to the final amount. I thank you from the bottom of my heart to anyone who can help. The account number is: 4875 Ag itau Bank Savings Account 13944-8/500 Danielle de Oliveira Pedrosa Cpf 135988556-05. THINK AS IF IT WERE SOMEONE YOU LIKE MUCH, ANY HELP IS WELCOME.

Of the 23 players on Brazil’s squad, 18 have one name in order to make things easier since each has a long full name. Neymar, Fred, Jo and Hulk are included in the list of one named players. It is unusual for players on the backline to have nicknames, but most of the attackers do. 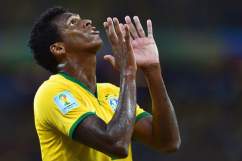 Jo, the Soccer Player: 5 Fast Facts You Need to Know

Read More
5 Fast Facts, Soccer, Sports, World Cup
Brazil's newcomer Bernard is replacing Neymar on the front line after a fracture to his vertebrae during the quarterfinals of the World Cup.