Raimundo Tevez, the father of Argentine soccer player, Carlos Tevez, was kidnapped in Moron, Argentina, on the morning of July 29, reports Todo Noticias.

1. Raimundo Tevez Was Kidnapped From His Car

According to TN, Raimundo Tevez was kidnapped while driving his car along a street in Greater Buenos Aires, in the neighborhood of Moron.

2. His Ransom Has Been Paid

A ransom has been paid by government officials in Argentina but Raimundo Tevez has not been released yet.

3. Raimundo Said Carlos ‘Loves Being With Me’

Raimundo Tevez is extremely close to his soccer playing son, in 2006, he told The Guardian:

He always said, ever since he was little, ‘I am happiest when I am kicking the ball around in the dirt here with my pals.’ There was nothing Carlos liked to do more. He’s happier playing football at home in Fort Apache than in the most imposing stadium in the world. Like any good worker, he takes on the responsibility that is his. Off the field, he’s very much part of our family – he loves being with me, his mother Adriana and his brothers. He’s special.

4. Raimundo Defended His Son While He Had an Open Affair

Tevez pictured with his wife, Vanesa, and daughter Florencia. (Getty)

While his son was conducting an open affair with Mariana Paesani, despite already having a long-term partner and two daughters, Raimundo Tevez went to bat for his son. Insisting that his son was loyal to his partner, Vanesa, and would return to her.

5. Carlos Is Heading to Argentina

Carlos Tevez had been back in Italy, training with his team, Juventus. After the news broke of his father’s situation, it was announced he was heading to Argentina to deal with it. He had to insist that he was staying with the team after there was speculation that he was going to follow coach Antonio Conte out of the team. 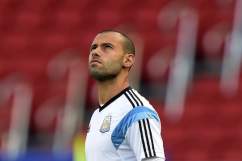