1. He’s Being Held Without Bail

Farrar is being held without bail on the murder charge. The Tennessean reports that police are not searching for any other suspects in the case.

2. Sgt. 1st Class Michael Braden Was Shot in the Chest

Detectives believe that the suspect walked on to the base in Lobelville and began shooting, eventually hitting and and killing Braden, 45. It’s reported that Braden was shot in the chest.

3. We Don’t Know What Caused the Shooting

Police have not made public a motive for the shooting, nor has it been revealed how Farrar gained access to the base.

4. Braden Had Been in the Military for 20 Years

According to Maj. Gen Max Haston of the National Guard, Braden had been in the military for more than 20 years. His role at Lobelville was to run the day-to-day logistical operations.

5. Farrar Was Arrested at his Home in Lobelville

WATE reports that Farrar was arrested at his home after the shooting, not at the the base. He was taken into custody without incident. A city Lobelville City Alderman Josh Warren told the station “I lived here over 30 years and nothing like this has ever happened, that I heard of.” 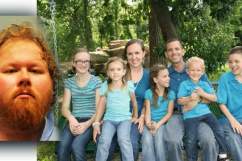