Award-winning Irish novelist Colum McCann was attacked in a New Haven, Connecticut hotel, reports The Associated Press. The writer, now a resident of New York City, was in Connecticut to speak at literary even on June 29, the assault happened on June 28.

1. McCann Was Attacked on Saturday Night

The attack is believed to have happened at the Study at Yale hotel on Chapel Street. (Getty)

The assault happened on the night of June 28 when it’s believed that McCann was trying to help a woman who was in a dispute with her companion. Cops think her companion may be the culprit. The hotel was The Study, located close to Yale University. Paramedics were called to the boutique hotel at around 10:15 p.m. on June 28, reports The Hartford Courant.

McCann’s wife, Allison Hawke, told reporters that McCann had significant dental work done and was unavailable for comment. He has been released from hospital. The Hartford Courant reported that McCann was treated at the Yale-New Haven Hospital for “significan” facial injuries.

3. No Arrests Have Been Made

The writer has been co-operating with police and cops in New Haven say that have “significant leads” in the case. The New Haven Register reports that McCann was in town to speak at Southern Connecticut State University, an event he missed due to his injuries.

4. A Native of Ireland, McCann Lives in NYC

CityTalk: Colum McCann, Author "TransAtlantic"Doug Muzzio introduces Colum McCann as a "magnificent liar, whose fictions tell profound truths." Winner of the National Book Award for "Let the Great World Spin," and best sellers "Dancer," and "Zoli," Colum McCann talks about his latest book, "TransAtlantic." Weaving history and fiction, moving through time and space, McCann's "TransAtlantic" is a MUST READ. Taped: 06-14-13 City Talk is CUNY TV's forum for politics and public affairs. City Talk presents lively discussion of New York City issues, with the people that help make this city function. City Talk is hosted by Professor Doug Muzzio, co-director of the Center for the Study of Leadership in Government and the founder and former director of the Baruch College Survey Research Unit, both at Baruch College's School of Public Affairs. Watch more City Talk at http://www.cuny.tv/show/citytalk2013-06-19T13:15:29.000Z

McCann is originally from Ireland but has been living in New York City for many years. He along with his wife, Allison moved to NYC in 1994, the live on the Upper East Side of the city with their three kids, Isabella, Jun Mikel and Christian. In addition to his writing, McCann lectures in Hunter College in Creative Writing. Watch McCann talk about his life lecturing in NYC above.

5. McCann Is a Previous Winner of the National Book Award for Fiction

His most famous work is arguably Let the Great World Spin, the novel won the 2009 U.S. National Book Award for Fiction. The book is an allegory for the 9/11 attacks. 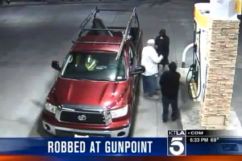 Read More
5 Fast Facts, Breaking News, Connecticut, Crime
Police believe he may have been trying to help a woman who was in a dispute.