Cleveland Cavaliers owner Dan Gilbert is at the center of the saga over LeBron James‘ pending decision largely because of a bitter rant Gilbert went on in a public letter to James after The King left Cleveland for Miami in 2010.

Here’s what you need to know about Gilbert, his relationship with James, and the status of the infamous letter:

1. Gilbert Called James a ‘Coward’ & Guaranteed the Cavs Would Win a Title Before the Heat

In the letter, written in comic sans font and posted on the Cavs website, Gilbert accused James of a “cowardly betrayal” and guaranteed that the Cavs would win a title before the Heat.

The letter read, in part:

The self-declared former “King” will be taking the “curse” with him down south. And until he does “right” by Cleveland and Ohio, James (and the town where he plays) will unfortunately own this dreaded spell and bad karma.

Tomorrow is a new and much brighter day….

I PROMISE you that our energy, focus, capital, knowledge and experience will be directed at one thing and one thing only:

DELIVERING YOU the championship you have long deserved and is long overdue….

You can read the whole letter here.

It would be hard for Gilbert’s guarantee to look much more foolish given what has transpired since: Miami has been to the Finals every year since James joined the team and has won two titles. Cleveland hasn’t even made the playoffs — or come particularly close to doing so — since James’ departure.

2. The Letter Was Still on the Team’s Site Until This Week

The letter was still up — apparently unbeknownst to people in the Cavs organization — until earlier this week, when it was taken down as the Cavs were intensifying their courtship of James.

A team spokesman told SB Nation that the team didn’t realize the letter was still on the site until staffers realized a spike in traffic to an archived page that still contained the letter.

The letter was removed years ago from the Cavs.com website, but over the last week, it was discovered that it still existed from this external link to a stagnant archived page. It was on the content management system platform that was used back in 2010.

The letter having been on the Cavs’ site for so long is one of the factors fueling speculation that the Gilbert-James rift is big enough to prevent James from signing with the Cavs.

3. The Letter Is One of the Main Things Preventing James From Making a Decision

A day after Cavs officials expected James to tell them he was coming back only to not hear from him, word circulated that the letter was one of the main things preventing James from making a decision.

Sports Illustrated’s Chris Mannix tweeted that James’ camp may have floated stories that James is still angry over the letter as a way to “soften the ground” for a return to Miami.

Across the league, team officials wondering if the idea that LBJ is suddenly hung up on @CavsDan letter is softening ground for Miami return

ESPN’s Michael Smith and Jamelle Hill discussed the letter and Gilbert’s lack of a formal apology earlier this week on the network’s Sports Nation show. Watch the video above.

Gilbert, who founded Quicken Loans in 1985, is a wildly successful businessman and one of the richest owners in professional sports.

Forbes Magazine estimated his net worth in 2013 at a whopping $3.8 billion.

The mortgage business has been very good to Quicken Loans founder Dan Gilbert, who has used profits from the nation’s largest online lender to invest $1.3 billion in downtown Detroit real estate, including his purchase of the Greektown Casino and Hotel. Quicken made $80 billion in loans in 2013, and is now servicing more loans, too, providing steady fee income.

In addition to Quicken Loans and the Cavs, Gilbert owns Quicken Loans Arena and two of its other tenants: The American Hockey League’s Lake Erie Monsters and the Arena Football League’s Cleveland Gladiators. He also owns the Cavs’ NBA Developmental League affiliate, the Canton Charge.

5. Gilbert’s Oldest Son, Nick, Has a Rare Disorder That Causes Tumors to Grow

Gilbert and his wife, Jennifer, have five kids. Their oldest is Nick Gilbert, who’s been an inspiration to kids across the country because of the grace and courage with which he’s handled his battle with Neurofibromatosis, a rare disorder that causes tumors to grow anywhere on the body.

Nick Gilbert has undergone multiple surgeries and chemotherapy treatments and lost vision in one eye.

The Cleveland Plain Dealer profiled Nick in 2011 after he represented the Cavs at the NBA Draft Lottery and brought home the Number 1 pick in the draft, which the team used on superstar-in-the-making Kyrie Irving.

When asked during the lottery broadcast for his reaction to being called a hero by his dad, Nick grinned and said, “What’s not to like?” The catch phrase spawned a marketing campaign by the Cavs, not to mention a million punch lines. But it’s much more than that. It’s actually a personal motto for the teen and his family living with a lifelong illness and all the complications that it brings.

Nick Gilbert also represented the Cavs at the lottery in 2013 (pictured with his dad and NBA commissioner Adam Silver in the tweet above) and brought back another Number 1 pick, which the Cavs used on Anthony Bennett. 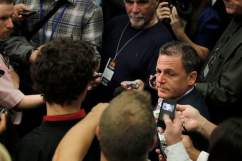 Dan Gilbert Photos: The Pictures You Need to See