The 22nd annual ESPY Awards ceremony will be broadcast live on ESPN at 9 p.m. ET in Los Angeles tonight, July 16. The event will feature a cast of the best new and veteran athletes in the world with rapper/songwriter Drake as the host.

This year is sure to have some great moments as all of the ESPYS before this have. Watch the video above to see Jimmy Valvano‘s speech after receiving the Arthur Ashe Courage Award in the 1993 which is to this day one of the most famous sports speeches in history, just before his passing from cancer.

Here’s what you need to know about it:

1. Drake Will Be Hosting It

Rapper/songwriter “Drizzy” Drake will be the 17th host of the ESPN-held award show. He feels he is perfect for the job since he is good friends with numerous athletes and is constantly spotted at sporting events as a diehard fan.

Our goal is obviously the night of the ESPYs to completely take over the Internet, for everything that we do to go viral and for people to enjoy days or weeks afterwards. We’ve been working hard, like I said, on the pre-tapes and on the monologue and on every aspect of the show just to make sure that it lives on past this night, which I can 100% guarantee it will.”

2. Fans Can Vote Online for the Nominees

On the ESPYs website, fans can vote for the nominees chosen for each category. Click here to see the full list of categories and nominees where you can vote with the click of a button until today at 9 p.m. ET.

ESPN provides full stats for each candidate that viewers can look at before casting their votes.

3. The Gift Bags For Nominees are Comprised of Over 50 Things

Whether they win or not, every nominee will be bringing home some big prizes. The gift bag this year is comprised of about 50 items including memberships, gift cars and health benefit packages.

Click <a href="here” target=”_blank”>here to watch the video above to see Washington Redskins’ wide receiver DeSean Jackson‘s presentation of the items in the basket.

4. Ozomatli Will Be Performing

Ozomatli will take the stage tonight in front of the best athletes in the world. The band has been around since 1995 and has released 7 albums since of their unique music that includes a mix of Latin, hip hop, and rock music that sounds like a form of Reggae.

They have performed in many famous music festivals including Coachella and Bonnaroo. Watch the video above to hear one of their most famous songs “It’s Only Paper” featuring Jack Johnson.

5. Many Athletes From Last Year Will Be Returning

These are just a few of the best athletes in the world that will be attending the event tonight. 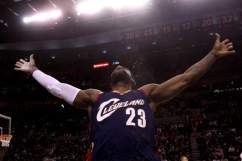 Loading more stories
wpDiscuz
0
0
Would love your thoughts, please comment.x
()
x
| Reply
The 2014 ESPY Awards will feature a cast of the best new and veteran athletes in the world with rapper/songwriter Drake as the host.