Tonight is one of the biggest nights in sports as the best athletes in the world gather and receive awards for their amazing accomplishments over the course of the past year and the twitter world is a-buzzing.

There are newcomers and veteran athletes, along with models and an array of famous stars that will be at the ESPYs dressed to impress to watch some of the funniest skits to the most emotional speeches given in the history of sports.

Drake wants to be the statue of Brazil so bad pic.twitter.com/jTYJOtztYF

On live national tv and all he wants is a hug from his daughter @StuartScott is a real man. Keep fighting and god bless

We're all pulling for you, @StuartScott. Keep fighting, my brother.

Fox and Major League Baseball have issued a joint statement on why the loss of Tony Gwynn was not mentioned… http://t.co/ULvQ0jE6O2

Chris Berman is everywhere these days

It’s going to be hard to let go of the image of @Drake dressed as @MannyPacquiao singing “Let it Go.” pic.twitter.com/rhioL8kHlT

Real Talk, Michael Sam got the weight of the world on his shoulders. Them real tears. Salute young man.

Drake dressed like a modern day disciple taking shots at Roger from Doug. That is NOT what Jesus would do. Or……is it?

Drake bout to get half the audience in trouble tho…

Drake look like he selling phone cases at the mall stands pic.twitter.com/w0o46lob7R

to everyone saying @Drake can’t host the ESPN awards because he didn’t play a sport pic.twitter.com/G45OvK7Pl0

When the USA vs. Ghana game won an Espy, everyone at the Espy’s started chanting “USA! USA! USA!” And idk it just made me really happy

So kind of @chrisbrown & @blakegriffin32 to take a surgery selfie of our host @Drake … pic.twitter.com/BmHJsj9VLS

So yea, this happened during Drake’s #ESPYS monologue – http://t.co/905urjL1lU pic.twitter.com/pzQ4PCTM7l

I’d rather tongue kiss Rick Ross RT @ESPNNBA Did you miss @Drake‘s opening monologue at the @ESPYS? Check it out: http://t.co/ptN2L64wRq 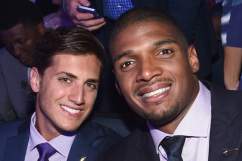 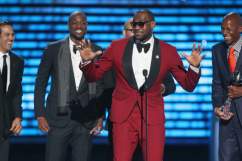 Loading more stories
wpDiscuz
0
0
Would love your thoughts, please comment.x
()
x
| Reply
Tonight the best athletes in the world are gathering to receive awards for their accomplishments from the past year and the twitter world is a-buzzing.