The family of Fatima Dyczynski, a 25-year-old MH17 victim, is convinced she is still alive, even after visiting the plane’s crash site in Ukraine.

Dyczynski, featured at a TED talk in 2013 in the video above, was on her way to Perth, Australia to begin working for IBM when the plane was shot down, according to the Sydney Morning Herald. Her parents, George and Angela Dyczynski, told News.com.au they feel, “not all things are looked at from the right perspective,” in regard to the investigation into the plane’s crash and that, “other perspectives are important to investigate.” Fatima’s father, a cardiologist, has felt something is “amiss” in the world’s skies since the disappearance of Malaysia Airlines Flight MH370 back in March.

According to News.com.au, George Dyczynski said there was a remote possibility that his daughter could have been catapulted into the sky when MH 17 went down, and that the cushion of her seat could have enabled her survival when she returned to the ground. He also said the extremely cold temperatures of a 33,000-foot altitude could have sent Fatima’s brain into hibernation, which would have counteracted the intense heat of the explosion.

2. Her Parents Are Threatening to Sue Anyone Who Says Fatima Died

According to The Independent, George Dyczynski told members of the Australian Associated Press in Amsterdam that he and his wife would be willing to sue if anyone were to suggest Fatima died in the crash without indisputable evidence. George Dyczynski feels that, since his daughter was an aerospace engineer, members of her scientific community should assist in the investigations into the reason behind the plane’s crash.

3. Her Mother Told Fatima’s Friend not to Talk to the Media

News.au.com reports that Angela Dyczynski told her daughter’s close friend, “do not talk to the media or anyone or you will be killed from our family. I do not want to see your name anywhere, understand,” before she and her husband left Amsterdam en route to Ukraine. Ces de la Cruz memorialized her friend with a coffee cup.

4. They’re the Only Relatives of a Crash Victim to Visit the Site

According to News.com.au, George and Angela Dyczynski were the only relatives of any of the 298 plane crash victims to visit the crash site in Ukraine. The couple made the long journey in spite of warnings from Australian, Dutch and Ukrainian officials about the risks of traveling to the area, including kidnapping.

According to her LinkedIn profile, Fatima Dyczynski was the CEO and founder of Xoterra Space, a tech start-up designed take Earth Observation (EO) data gathered in space and translate that data into a new generation of services for clients. The company was working on a tracking application that would, ” identify, locate and link intelligent space and ground based data to events,” according to the company’s LinkedIn page. 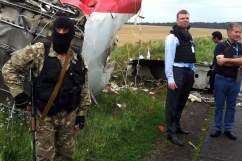 Loading more stories
wpDiscuz
2
0
Would love your thoughts, please comment.x
()
x
| Reply
The parents of Fatima Dyczynski, a victim of the MH17 plane crash in Ukraine, believe their daughter survived the crash, in spite of having visited the crash site themselves.