A 20-year-old mother was arrested and charged with a felony child abandonment charge after she abandoned her 10-month-old daughter on the platform of one of New York City’s busiest subway stations.

Frankea Dabbs, featured in the surveillance video above, is expected to be arraigned later Tuesday afternoon, according to NBC 4 New York.

1. Dabbs Abandoned Her Baby at the Columbus Circle Subway Station

Dabbs left her baby on the platform of the Columbus Circle Subway Station on West 59th Street late Monday morning. The baby was found by Catherine Boursier, a passerby, who stayed with the baby until police arrived.

2. The Baby Was Unharmed

Police took the baby to St. Luke’s-Roosevelt Hospital on Monday night, where she was in stable condition. The girl is now in ACS custody. According to DNAinfo, the baby’s name is Milini Edmonds.

Mother accused of abandoning her baby on the #subway platform under arrest. @NBCNewYork pic.twitter.com/ns45plfdQI

According to ABC 7 New York, Dabbs had come to New York from North Carolina. She was homeless and decided she could no longer care for the baby. Cops confirmed Dabbs is the baby’s biological mother.

Some of Dabbs’ family members spoke to the New York Daily News, saying Frankea needs help. Her father, Franklin Dabbs, said, “I think she needs help. She’s been though a lot. Her boyfriend got killed. Her stepdad threw her out. It’s just sad.”

Dabbs will turn 21 in 12 days, according to the New York Daily News.

4. The Baby’s Father is Dead

Franklin Dabbs told the New York Daily News the baby’s father was killed when his and Frankea’s North Carolina home was robbed. According to the Associated Press, Dabbs came to New York with her daughter on July 2. According to ABC 7 New York, Dabbs is wanted for marijuana possession in North Carolina. According to Derek Rowles of ABC11 Raleigh-Durham, Dabbs was arrested in North Carolina in 2011 for prostitution. The identification she carried indicated she was from California. An NYPD spokesperson said of Dabbs, “She felt she couldn’t take care of the baby and thought she was leaving her in a safe public space.”

5. Dabbs Was Arrested at a Starbucks

NBC 4 New York reports Dabbs was arrested at a Starbucks at 71st Street and Broadway at 12:30 a.m. Tuesday, not far from the Columbus Circle subway station. Police were alerted to Dabbs’ whereabouts after following a tip. 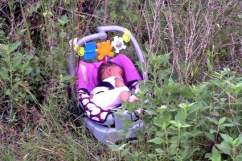