Since 2005, Fred has been an integral part of Brazil’s national team as a leading goalscorer next to his other one named team mate, Neymar.

He went on to become the second highest goalscorer in the 2005-2006 season in Ligue 1 with 14 goals. The next season he still managed to score 11 goals in 20 games despite an injury to become Lyon’s top goalscorer and lead the to another title.

Fred joined the Brazil national team in 2005 and was named to the 2006 World Cup roster as a second string striker. In a win against Australia, Fred contributed 1 of the 2 goals in the 90th minute after taking the field as a substitute.

In the 2014 World Cup so far, he scored a goal in the final group match against Cameroon to contribute to the 4-1 win.

Fred left Lyon in 2009 after notifying the team at the end of 2008 that he planned to move back to Brazil.

The soccer star ended up joining Fluminense, a Brazilian football club with a 5-year contract for an undisclosed amount. In his opening game for Fluminese he tallied 2 goals and then by the summer of 2011 he managed to break the record for most goals scored in the Brasiliero league after his 44th goal.

By March of 2014, Fred became the 9th highest goalscorer ever for Fluminese.

Fred’s net worth is approximately $12 million while raking in about $4 million per year.

Although his contract with Fluminese is almost up, he will most likely stay on the team and if not he will likely remain in Brazil anyway. He has already turned down teams in the Premier League looking to buy.

Of the 23 players on Brazil’s squad, 18 have one name in order to make things easier since each has a long full name. Neymar and Hulk are included in the list of one named players. It is unusual for players on the backline to have nicknames, but most of the attackers do. 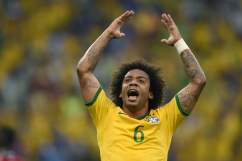 Marcelo, the Soccer Player: 5 Fast Facts You Need to Know

Read More
5 Fast Facts, Soccer, Sports, World Cup
Follow Heavy ↓
Fred has been an integral part of Brazil's national team since 2005 with goals scored in both the 2006 and 2014 World Cups.