Gonzalo Higuain has been a key part of Argentina’s success thus far in the 2014 World Cup. After scoring in both this World Cup and the last, the Argentine people are pretty grateful that as a dual citizen, he chose Argentina over France. Watch the video above to see the best goals of his career.

Gonzalo Higuain – 2010 FIFA World CupAlthough Lionel Messi and Carlos Tevez drew a lot of the attention, it was Higuain who led the Argentina in South Africa with four goals, including a fine piece of skill against Mexico. More highlights of the best players from South Africa 2010 as selected by FIFA's Technical Study Group: http://www.youtube.com/playlist?list=PL742BEB0A39139900 2010 FIFA World Cup…2013-02-24T23:46:20.000Z

Higuain has contributed goals for the Argentina national team in both the 2010 and 2014 World Cups. Watch the video above to see highlights of Higuain in the 2010 World Cup.

Not only did he score goals in South Africa, but he had a hat-trick against South Korea in their second group match to put them ahead in their group and seal a 4-1 win in the game. This marked him as the third Argentine player to score a hat-trick in the World Cup behind Guillermo Stabile (1930) and Gabriel Batistuta (1994 and 1998). It was his 7th international appearance ever.

In doing so he also ended the hat-trick drought since none were scored in the 2006 World Cup. The last player to score three goals in one game at the World Cup was in the 2002 World Cup. He went on to score another goal in the tournament against Mexico in the Round of 16 to tally 4 goals overall and place him as a top goalscorer for Argentina in South Africa.

In the 2014 World Cup, he started off as a substitute for Argentina and managed to assist the winning goal in his debut game after he was put in in the second half. Higuain had a beautiful pass to superstar teammate Lionel Messi who netted Argentina’s second goal of the game to close out Bosnia and Herzegovina 2-1 in the group match. After that he was put in as a starter and scored Argentina’s only goal of the game against Belgium to carry Argentina into the semifinals of the tournament which is featured in the video below.

2. He Has the Transfer Fee Record For Napoli at $54 Million

The deal for Napoli was a 5-year contract with a whopping transfer fee of $54 million at the time.

3. Lionel Messi’s FC Barcelona is Looking to Acquire Him

Two of the best players in the world, Neymar and Messi belong to the F.C. Barcelona squad. Messi, a good friend and Argentine teammate of Higuain, has expressed his wish to have his teammate join him in Barca. Despite Messi’s plea, Higuain wishes to remain in Italy to represent Napoli for the remaining four years of his contract.

I am really grateful to Leo (Messi) for his kind words but I have a contract with Napoli that makes me very happy.

The Partenopei club (Napoli) has always treated me very well since I arrived there.”

Since Higuain joined Napoli, he has score 17 goals in 31 appearances for the Italian club which has caused a lot of interest to arise within the best clubs in the world, including Arsenal.

Barcelona was rumored to be thinking of an offer of about $75 million.

4. He Holds Citizenship in Both France and Argentina

Many are unaware that Higuaín was born in Brest, France. At the time, his father, former Argentine footballer Jorge Higuaín, was in France playing for Stade Brestois 29 as an expatriate where he met Higuain’s mother. At 10 months old, he moved back to Argentina and didn’t return to France until he visited during 1998 FIFA World Cup.

Because of where he was born, he attained both a French and Argentine passport. At first, he refused to play for either team after receiving calls from both, but eventually chose to represent Argentina. Higuain is one of three foreign-born Argentine players that have competed for them in a FIFA World Cup.

In 2010, Higuaín became one of three foreign-born players in history to have played for Argentina in a FIFA World Cup. the only other two players on that list include Pedro Arico Suárez (1930) and Constantino Urbieta Sosa (1934).

5. He is Rumored to Be in a Private Relationship With Daniela Saurwald

The last the public has heard, Higuain is seeing journalist and TV producer, Daniela Saurwald. the relationship began in 2011, but has been extremely private. Daniela is the daughter of a wealthy European finiancier and many attribute the privacy her father has taught her to her caution with her relationship with Higuain and the fear of publicity. 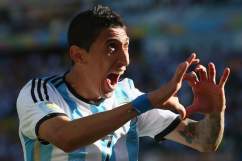 Read More
5 Fast Facts, Soccer, Sports, World Cup
As a top goalscorer for Argentina in both the 2010 and 2014 World Cups, Gonzalo Higuain is a key striker in Argentina's lineup this year.