A female psychiatric case worker was shot dead by one of her patients inside the Wellness Center of Mercy Fitzgerald Hospital in Darby, Pennsylvania. A doctor was also wounded in the attack, but the same doctor was able to return fire with his own gun, hitting the suspect, reports Philly.com. The confrontation took place inside the doctor’s office. After the gunman was wounded, other hospital staff were able to subdue the suspect. The gunfire happened inside the Sister Marie Wellness Center in the hospital facility. The suspect was identified as Richard Plotts by ABC Philadelphia.

Here’s what you need to know about this developing story:

1. A Female Hospital Employee Died After Being Shot in the Head

Darby Mayor Helen Thomas confirmed that the doctor was shot, it was later reported that the doctor had been grazed and was expected to survive. According to Philly.com, the deceased is a female hospital employee.

ABC Philadelphia reports that one of the victims is a 52-year-old doctor who was grazed in the torso and head by gunfire.

NBC Philadelphia reports that one of the victims was taken to the University of Pennsylvania hospital in Philadelphia. One ambulance could be seen leaving Mercy Fitzgerald with a police escort.

2. A Suspect Is Critical Condition

A suspect is in custody. According to the Delaware County DA, he is a 48-year-old male who was apprehended about ten minutes after the initial 911 call came through. He was shot three times and is in critical condition. The man is reported to have had psychiatric issues in the past.

3. A Hospital Official Said He Heard Around 7 Shots Fired

According to ABC Philadelphia, a hospital official reported hearing around seven shots fired during the incident, which cops heard about in a 911 call at 2:19 p.m. local time, according to the Delaware County Prosecutor’s office. 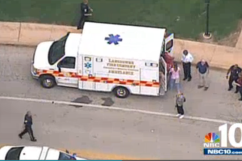 Mercy Fitzgerald Hospital Shooting: The Pictures You Need to See

4. The Main Hospital Is in Lockdown

The scene outside the hospital after the shooting. (Screengrab via NBC Philadelphia)

The hospital, which is surrounded by police cruisers and ambulances, has been locked down. Some of the responding officers can be seen wearing tactical gear.

One ambulance could be seen going from the hospital’s office complex to the emergency room. ABC Philadelphia reports that police have come from Upper Darby and Haverford to help with the operation. The Wellness Center is being evacuated with every worker being searched on the way out.

5. Mercy Fitzgerald Is One of the Largest Catholic Hospitals in Pennsylvania

According to the hospital’s website, 6,500 people work at the hospital. The hospital is the “largest Catholic healthcare system serving Delaware Valley.

Mercy Fitzgerald Hospital Shooting: The Pictures You Need to See

Loading more stories
wpDiscuz
2
0
Would love your thoughts, please comment.x
()
x
| Reply
A Doctor has been killed and multiple other people are injured after a shooting erupted at the Pennsylvania hospital.