Nineteen-year-old Jaime Ramos was identified Thursday morning as one of three suspected bank robbers responsible for leading police on a high-speed car chase after robbing a bank in Stockton, Calif. The three suspects took three women hostages, only two of whom survived. Cops saying Ramos used now-deceased mother Misty Holt-Singh as a human shield during a firefight with police on Wednesday afternoon, reports CBS San Francisco.

1. He’s The Only Surviving Suspect

The names of the other two suspects have not yet been released. In a Stockton Police news conference, it was announced that the first suspect, a 30-year-old Hispanic male, is a documented Nortenos gang member who was driving the vehicle at the time of the shootout. The second deceased suspect, a 26-year-old Hispanic male who was also a documented Nortenos gang member with prior arrests for narcotics and domestic violence, was the primary shooter during the car chase.

When police arrived at the SUV after the 45-minute car chase, the first suspect was already dead. The other was confirmed dead Wednesday evening.

Joe Silva, a spokesman for the Stockton Police Department, says he has never seen anything like the event:

During my 19 years as a law enforcement officer, this is the first time I’ve seen this here in the city of Stockton. So right now, we’re interviewing bank employees, and we’re going to debrief the hostages once they’re OK. We can talk to them to see what exactly transpired in the bank.

2. People Who Say They Knew Him Are Speaking Out on Social Media

He's going to do life now because he couldn't stay away from the wrong people & couldn't stop making dumb choices. That's on him though.

On Thursday afternoon, a woman who says she knew Ramos tweeted the above, saying he “couldn’t stay away from the wrong people”.

In a news conference delivered by the Stockton Police department, it was announced that Ramos is an associate of known gang members in the Nortenos street gang.

According to NBC Bay Area , all three suspects are “well-documented gang members who had loaded magazines strapped to their bodies, fired hundreds of rounds and riddled at least 14 patrol cars.”

That suspect, Jaime Ramos, is an associate of the Nortenos gang. Assailants had "massive amounts" of ammunition. Some strapped to bodies.

Jose Maldonado claims he saw the robbers taking the three women out of the bank, and said they “didn’t seem to care that there were police all around.” KCRA reports Maldonado’s statement:

They were not afraid. They weren’t going to take no for an answer. These poor women, they were screaming, they were so distraught, so scared.

4. He’s Believed to Have Used Deceased Hostage Misty Holt-Singh as a Human Shield During the Shootout

In the same news conference, police announced that Ramos was the rear-seat passenger in the car, and suffered no injuries during the shootout. They believe he used the third hostage, Misty Holt-Singh, as a human shield.

Ramos and the two deceased suspects fired the AK-47-style rifles through the windows of the blue SUV during the high-speed chase. During the pursuit, the two bank employees who were held hostage were reportedly thrown or jumped from the vehicle. One of the employees was taken to a nearby hospital with a gunshot wound, while the other was grazed with a bullet.

5. He Was Booked On Homicide, Kidnapping, Robbery and Attempted Murder Charges

Ramos was arrested and booked into the San Joaquin County Jail. Stockton police report that the Ford Explorer the gunmen were driving during the high-speed chase was traveling at speeds up to 100 mph. When the vehicle came to a stop after after security forces successfully disabled it, the firing continued between police and at least one assailant.

At least 14 cars were struck by bullets during the chase, reports ABC News.

Police Chief Eric Jones said the robbers were “no doubt” trying to kill the officers, in a news conference on Wednesday. 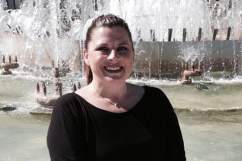 Read More
5 Fast Facts, Breaking News, Car Chases
wpDiscuz
47
0
Would love your thoughts, please comment.x
()
x
| Reply
19-year-old Jaime Ramos has been identified as the only living suspect in a bank robbery, kidnapping and car chase that left one victim and two suspects dead in California.