NASCAR’s poster boy Jeff Gordon is walking away with his fifth victory at Indy, marking him as the first ever driver to do so. Watch the video above to see Gordon on the Dan Patrick Show.

1. He is the Only 5-Time Indy Winner in History

Gordon started in third place going on to lead the field for 93 laps. The victory was a milestone in the Gordon’s career as it marked him the first the first ever racer to win five times at Indy.

He edged by teammate Kasey Kahne during a restart with 17 laps to go and stayed ahead to clinch the win. Kahne styed with him and took second at the Brickyard 400. The race was Gordon’s second Sprint Cup first place finish this season and his 90th total.

Once we got down into (turns) 1 and 2, I could hear (Kahne) getting loose. I’ve got to thank him for racing me clean. He’s such a good guy.

I cannot believe this just happened. I was trying so hard with 10 to go not (to) focus on the crowd, trying not to let it get to me. It’s such a big race, such an important victory. You can’t help it, your emotions take over.”

2. He Races for Hendrick Motorsports

Gordon has been with Hendrick Motorsports since 1992 when Rick Hendrick watched him race down in Georgia. in his 22 years with them, he has won 90 races with the team.

Gordon is sponsored by many racing brands with his biggest sponsor being Pepsi.

3. He Has Been Married Twice

Gordon was originally married to Brooke Sealey, whom he dated in private before they were married in 1994. The two went through a messy divorce after Sealey sued for marital misconduct and Gordon counter-sued. Sealey walked away with 15.3 million by the end of the proceedings.

He is now married to Ingrid Vandebosch, a belgian actress and model whom he met at a dinner party in 2002. They didn’t start dating until 2004 but got married in November 2006. Their first child was born in June 2007 and they now have 2 children.

Gordon has been racing for 22 years (he is now 42) and is worth $150 millino between racing victories and sponsorships.
He earns an annual salary of $22 million, $15 million of which is from endorsements.

5. He Frequently Makes Appearances on Television

Gordon has made various cameos in tv shows, movies and talk shows. He has co-hosted Regis and Kelly when Regis was out, along with starring as a contestant in Who Wants to be a Millionaire (Sports Superstar Edition).

He has also been on Saturday Night Live, Extreme Makeover: Home Edition and many more. Click here to see a full list of his appearances. 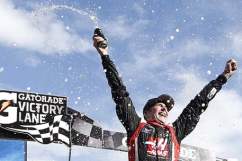 Loading more stories
wpDiscuz
0
0
Would love your thoughts, please comment.x
()
x
| Reply
NASCAR's poster boy Jeff Gordon is walking away with his fifth victory at Indy, marking him as the first ever driver to do so.