Philadelphia police have arrested a suspect in the murder of a 23-year-old woman who was found inside duffel bag.

Cops arrested 22-year-old Philadelphia man Jeremiah Jakson, who also goes by Jerry Jackson, after he confessed to the killing of Laura Araujo. Araujo, a recent art school graduate, was found shoved inside a duffel bag surrounded by the rest of her belongings in trash bags. Jakson now faces murder, burglary and robbery charges, according to Fox 29.

Jakson and Araujo had rooms next-door to one another in the same apartment building, according to Fox 29.

Here’s what we know about Jakson and his alleged connection to this shocking case.

1. Jakson Posted a Troubling Facebook Status the day Before Araujo’s Body Was Found

Jakson posted the the Facebook status pictured above Sunday, July 13, just one day before Araujo’s body was found. The troubling post reads:

Father please forgive my sins I had committed through life, im not perfect, im not great, im on my own with no guidance, I surrender to you. And will bowdown to the king and worship.

According to NBC10, Jakson’s mother was instrumental to the success of the police investigation. She described her son as troubled and knew something wasn’t right when she saw his arms covered in burns on Tuesday. She told NBC10 she kicked him out of her home after he robbed someone. She didn’t know where he had been staying when Araujo was killed.

2. Araujo’s SUV Was Torched; Jakson Has Burns on His Arms

According to Philly.com, Jakson set Araujo’s Toyota RAV4 on fire to destroy evidence after dumping her body and belongings. The medical examiner has determined Araujo died of strangulation and blunt-force trauma. Police originally became suspicious of Jakson after he was admitted to the hospital to be treated for burns, reports CBS Philly. Cops found Jakson’s cell phone by Araujo’s torched car, reports NBC10.
According to Philly.com, Jakson thought Araujo was wealthy because of the car she drove.

3. Araujo Was Apartment Hunting When She Was Killed

According to CBS Philly, Araujo had been looking for a new place to live when she was killed. The personal nature of the items in her possession, including clothes, her bank statement and personal journal, led investigators to believe she was traveling around Philadelphia looking for a place to stay.

I told her, ‘If anybody bothers you, you let us know, because we got your back.’ … She didn’t have to look for a place to stay. All she had to do was come right back where she came from. I would’ve welcomed her with open arms.

4. Araujo Was a Recent Art School Graduate With a Promising Future

I did not know this young woman, but rest in power to a very new ancestor, Laura Araujo. Visibility Matters. pic.twitter.com/VuPD731bkU

Araujo, a Bronx native, was described as a nice person who “had a lot of good things in her future” by her former classmates and Homicide Unit Captain James Clark. She volunteered at Christian outreach organizations and had worked as a special-needs caregiver and housekeeper, according to Philly.com. Araujo graduated from the Art Institute of Philadelphia with a degree in fashion design, according to NBC10.

5. The Victim’s Body Was Dumped in a Vacant Lot

According to WPVI, Araujo’s body was discovered Monday at around 5:30 a.m. in a vacant lot. Cops believe her body had been there for roughly four to eight hours. 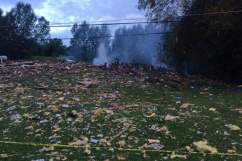 Loading more stories
wpDiscuz
0
0
Would love your thoughts, please comment.x
()
x
| Reply
Jeremiah Jackson has been charged with the murder of Laura Araujo, a young art school graduate whose body was stuffed in a duffel bag and left in the trash.