Boston is in despair as the Red Sox traded away two of their best pitchers in one day. John Lackey is officially the new pitcher for the St. Louis Cardinals after 4 years on the Red Sox.

Here’s what you need to know about the trade:

The veteran pitching lineup that made up the Red Sox World Series Championship team is almost completely diminished now that Lester was taken by Oakland and Lackey was traded to the Cardinals.

The Red Sox sen $1.75 million along with Lackey and a minor leaguer.

2. The Red Sox Got Allen Craig and Joe Kelly in Return

In return for giving up Lackey to St. Louis, the Red Sox received outfielder Allen Craig and another right pitcher, Joe Kelly.

Joe Kelly has only started three times this year after recovering from a 3 month benching with a strain to his left hamstring that he attained during a game.

3. The Cardinals Got Justin Masterson This Week Too

After a disappointing season with the Cleveland Indians, they decided to trade him to the St. Louis Cardinals today (Wednesday). In return, the Indians got James Ramsey who was a no. 23 overall pick by the Cardinals in the draft. Ramsey plays in the outfield with a .300 batting average, 13 homeruns and 36 RBIs.

Masterson has not yet moved off the disabled list but is due to come off of it by the end of the week. There is speculation that more trades from the Indians will occur now. Cleveland is in the running against 5 other teams for the wild-card spot this season.

Lackey is only costing the Cardinals half a million dollars in the 2015 season because of a clause in his contract that consisted of five years and $82.5 million that demanded $500,000 salary if Lackey got Tommy John surgery. He ended up getting the surgery in 2011.

5. The Red Sox Dealt Away Their Two Best Pitchers in One Day

Along with 2013 World Series finisher John Lackey, the Red Sox gave star pitcher Jon Lester to the Oakland A’s earlier today much to the disappointment of Boston’s fans and the team.

The Red Sox had their chance to keep Lester, but blew it with a sub-par deal for a contract at $70 million for four years. A pitcher of his level deserves a lot more despite the fact that Lester said in January that he would accept a hometown discount in order to stay.

Lester will become a free agent in 2015 and said before the trade that he would definitely wnt to become a part of the Red Sox eventually. There was much conflict over the decision to trade Lester with the majority voting to keep him and in favor of investing long-term.

Since the Red Sox wouldn’t give him what he was looking for (and deserves) trade discussions began when so many teams were interested in the talented pitcher.

Lester’s teammates were probably the most upset and shocked when they started hearing the rumors and especially now that the deal is done. David “Big Papi” Ortiz and Dustin Pedroia were unhappy with the Red Sox’s decision to let him go.

Of course you want to keep Lester around and continue playing together. He’s one of the best pitchers in the game. No question about it. I don’t know, man. It’s frustrating to see him going somewhere else. It’s just the situation that we’re facing right now.”

Wishing my man Jon Lester all the best, Red Sox Nation and the Large Father will miss you! pic.twitter.com/7uWpXw8XnH 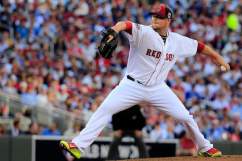 Loading more stories
wpDiscuz
0
0
Would love your thoughts, please comment.x
()
x
| Reply
Boston is in despair as the Red Sox traded away two of their best pitchers in one day. John Lackey is officially the new pitcher for the St. Louis Cardinals after 4 years on the Red Sox.