Jorrit Faassen may be Dutch, but as the boyfriend of Vladimir Putin’s oldest daughter, he’s been the target of a heaping of scorn lately from his countryman, many of whom blame Putin for the deaths of 193 Dutch nationals aboard Malaysian Airlines Flight 17.

Faassen, like most Putin associates, is shrouded in mystery. But he’s been shoved into the spotlight over the past few days as protesters demonstrated outside his suburban penthouse apartment and a Dutch mayor called for his girlfriend to be deported.

1. He’s Served as an Executive at Gazprom, the Russian State-Run Gas Company

The Moscow headquarters of Gazprom, the state-run gas giant where Maria Putin’s boyfriend served as an executive. (Getty)

According to a 2012 New York Times profile of Putin’s daughters, Faassen has served as an executive at Gazprom, the Russian state-controlled gas company partially owned by Vladimir Putin.

The Times reported at the time:

Dutch and Russian news reports have connected Maria Putin to Jorrit Faassen, a Dutchman who has held high-level positions at subsidiaries of the Russian state gas company, Gazprom. One Dutch journalist who wrote about Mr. Faassen said he took his byline off the story for fear of reprisal. The article quoted a Dutch oil executive who said he met Maria Putin at a party in Moscow.

2. A Russian Banker Went to Prison After the Man’s Body Guards Attacked Faassen in a Roadrage Incident

Faassen made headlines in 2010 when he was attacked and beaten by the bodyguards of prominent Russian banker Matvey Urin following a car accident.

The state-run Russian news organization Ria Novosti reported that Urin was found guilty of hooliganism, battery and property damage following the incident, and later sentenced to 7 1/2 years in jail after a Russian court found him guilty of committing $517 million worth of fraud.

Critics of Putin accused him of ordering harsher-than-usual punishment for Urin because of Putin’s connection to Faassen, who at the time was rumored to be married to Maria Putin. (There have been no reports of the two getting married, and at the time few media outlets had confirmed the two were even together.)

Ria Novosti reported at the time:

The severity of the treatment meted out to Urin served to kindle speculation about links between Faassen and Putin.

Faassen has been rumored to be close to one of Putin’s daughters, with some media speculating that he might be her husband.

Putin’s press secretary Dmitry Peskov has denied these rumors, while in a televised interview three months after the incident, Putin would not confirm that any of his daughters is married.

3. Faassen & Maria Maria Putin Live in a Penthosue in an Upscale Dutch Village

Faassen and Maria Putin live in Voorschoten , an upscale village in the province of South Holland not far from The Hague.

The two live in a penthouse in the building pictured above, where people had planned to take part in an anti-Putin demonstration.

The lives of Putin’s daughters are so shrouded in secrecy that when Dutch media reported in 2013 that Putin planned to visit Maria and Faassem, a spokesman for the Russian leader not only denied that Putin was planning on visiting the couple, but also denied that Maria even lived in Holland.

But bits and pieces of information about Faassen have come out at various times, including that he studied architecture at The Hague University, according to the Moscow Times.

5. A Dutch Mayor Called for Maria Putin to be Deported, but Later Apologized

Pieter Broertjes, the mayor of the Dutch city of Hilversum, suggested in a radio interview that Maria Putin be deported.

According to the New York Post, Broertjes said the following:

We could also deport Putin’s daughter from the Netherlands, because she lives in the Netherlands. Then you will have a totally different signal to give.

Brojerties later tweeted that the comment “was not wise” but that it “stemmed from a sense of powerlessness that many people will recognize.” 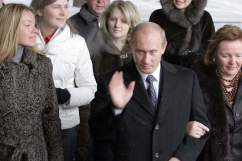 Loading more stories
wpDiscuz
4
0
Would love your thoughts, please comment.x
()
x
| Reply
Jorrit Faassen may be a Dutch citizen. But as the boyfriend of Vladimir Putin's daughter, Maria, he's closely associated with the most hated man in Holland.