Jose Bautista, known as “Joey Bats” is the captain of the American League team this year in both the Home Run Derby and the All-Star game. He ended up being eliminated in the Second round of the contest. Watch the video above to see some of his highlights from last year.

2. He Has Played 6 Different Positions

Bautista is one of the most versatile players in the league and has played 6 different positions since he signed his first contract in 2001.

He was a designated utility player in his earlier years but now consistently plays in the outfield.

This year will be Bautista’s 5th All-Star game of his career. He was one of the top receivers of votes onto the American League team of all time and was chosen to be captain as a veteran of the team.

Bautista has payed for the Toronto Blue Jays for the majority of his Major League career starting in 2008. Before, he bounced around to numerous teams starting in 2003 until he found his place in Toronto.

In 2011, Bautista made a deal worth $64 million to extend his contract five more years. He currently makes $14 million annually not including sponsors.

5. He Has Two Kids With His Girlfriend

Although they have yet to marry, Bautista and his girlfriend Neisha Croyle have been together for along time and have two daughters together. Estela Marie was born in 2011 and Ava was born in 2013 from both parents of Dominican decent. 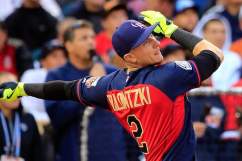 Loading more stories
wpDiscuz
0
0
Would love your thoughts, please comment.x
()
x
| Reply
The Toronto Blue Jays' Jose Bautista or "Joey Bats" is the captain of the American League team this year in both the Home Run Derby and the All-Star game.