Grondona at the World Cup semifinal in 2014. (Getty)

Julio Grondona, the vice president of FIFA, has died at the age of 82, reports La Nacion. In addition to his role with FIFA, Grondona had been the head of the Argentine Soccer Federation for 35 years.

1. He Had Just Been Hospitalized

2. Grondona Was in FIFA’s ‘Old Guard’

Grondona was a key part of appointing Diego Maradona as Argentina coach. (Getty)

Grondona was seen as one of “FIFA’s old guard.”

3. Grondona Was a Vile Anti-Semite

He constantly attracted controversy in his career, especially for his various anti-semitic comments. In 2003, he said that the didn’t think Jews could referee at the highest level because “Jews don’t like hard work.” When highly-rated Argentine coach, Jose Pekerman, was slated to become coach of Argentina’s soccer team, Grondona was not happy, stating that he felt Jews have no place in soccer because “Jews don’t like it when it gets rough.”

4. His Career at the Top of Argentine Soccer Went on For 60 Years

He was a high-ranking soccer official stemming from 1956 when he and his brother, Hector, founded Arsenal in Argentina. During his reign at the top of Argentina soccer, the team went to three World Cups, winning only once, in 1986.

5. Controversy & Corruption Run in the Family

At the last World Cup in Brazil, his son, Humberto, admitted to sellling FIFA tickets on the black market. 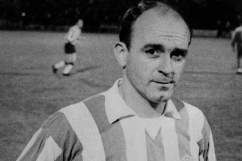