One of the two men cops say is responsible for a shooting June 29 on Bourbon Street in New Orleans turned himself in Wednesday night, cops said.

Justin Odom is wanted on unrelated warrants but is believed to be connected to the shooting, which occurred in the early morning hours of July 29 and left 10 people injured.

A police press release says Odom is “known to associate with a white male named either Josh or Joe, who is also a person of interest in this investigation.”

1. Odom Turned Himself in Wednesday Afternoon

Odom turned himself in Wednesday afternoon to police in Gretna, a New Orleans suburb.

Fox 8 New Orleans reports he was arrested on charges from unrelated warrants.

New Orleans cops had released the surveillance video above, identifying a person of interest in the investigation, late Sunday night. Police have not said whether Odom is the person seen in the video.

2. One Victim Has Died

WAFB reports that 21-year-old Brittany Thomas of Hammond, Louisiana, died on Wednesday afternoon, July 2. She had been listed in critical condition.

The Times-Picayune reports four other victims are still in the hospital, in stable condition. Four victims received treatment and have been released from the hospital, while one man was grazed in the chest and refused medical treatment.

3. Graphic Footage Shows an Armed Man in the Street

Additional surveillance footage released by cops shows an armed man raising a gun, causing passersby to flee. The video, shown above, is graphic and may be disturbing to some viewers.

Police: 2 Men to Blame for Bourbon St. ShootingNew Orleans police say two men exchanged gunfire early Sunday on the city's always-crowded Bourbon Street and nine people were shot in the crossfire. (June 29) Subscribe for more Breaking News: http://smarturl.it/AssociatedPress Get updates and more Breaking News here: http://smarturl.it/APBreakingNews The Associated Press is the essential global news network, delivering fast, unbiased news from every corner of the world to all media platforms and formats. AP's commitment to independent, comprehensive journalism has deep roots. Founded in 1846, AP has covered all the major news events of the past 165 years, providing high-quality, informed reporting of everything from wars and elections to championship games and royal weddings. AP is the largest and most trusted source of independent news and information. Today, AP employs the latest technology to collect and distribute content – we have daily uploads covering the latest and breaking news in the world of politics, sport and entertainment. Join us in a conversation about world events, the newsgathering process or whatever aspect of the news universe you find interesting or important. Subscribe: http://smarturl.it/AssociatedPress http://www.ap.org/ https://plus.google.com/+AP/ https://www.facebook.com/APNews https://twitter.com/AP2014-06-30T00:29:17.000Z

Cops said two young men were responsible for the shootings. New Orleans Police Superintendent Ronal Serpas called the shooters “two cowardly young men trying to hurt one another.” You can watch the superintendent’s briefing in the video above.

5. Many of the Victims Were Tourists

According to the New Orleans Times-Picayune, only two of the 10 shooting victims were from New Orleans. The rest of the victims were tourists, who came to New Orleans from places like Florida, Mississippi and Australia.

Amy Matthews, the 21-year-old Australian shooting victim, told The West Australian she wrote a paper examining gun use in the United States. She said of her experience, “This won’t deter me from coming back but it makes me angry that the Government can’t be strong enough to say, ‘No, something needs to be done.'” 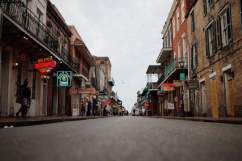 Read More
5 Fast Facts, Breaking News, Crime, New Orleans
Justin Odom has been identified as a person of interest in the June 29 Bourbon Street shootings, which wounded nine and killed one.