A 19-year-old Texas Tech University cheerleader has sparked international outrage after Facebook photos of her posing with carcasses of endangered African animals went viral. Kendall Jones has been hunting since she was a teenager. She’s hunted and killed some of Africa’s rarest species, including the white rhino, lion and leopard.

Conservationists have responded to Jones’ photos with harsh comments on her Facebook page and an online petition to have her banned from entering any African state.

1. She Grew Up Watching Her Dad Hunt

According to her biography, Jones grew up watching her dad hunt on their family ranch in Texas and took her first trip to Africa when she was 9. She was passionate about hunting even then, saying, “As badly as I wanted to shoot something I was just too small to hold the guns my dad had brought.”

Her family traveled to Zimbabwe so her father could hunt the Big 5, the term that encompasses the elephant, rhinoceros, Cape buffalo, lion and leopard in Southern Africa.

Jones said she shot her first animal, a white rhino, during a 2008 trip to South Africa when she was 13. While white rhinos are classified as Near Endangered by the World Wildlife Fund, they’re the only species of rhino that isn’t endangered. White rhinos are particularly vulnerable to poaching because they aren’t aggressive and live in herds. They’re typically sought after for their horns.

Jones returned to Africa in 2009 to finish hunting her Big 5 when she was 14. Over the course of two safaris, which totaled 42 days, she took down a lion, leopard, Cape buffalo and elephant. She had the safari’s professionally recorded and converted to DVDs. During this trip, she also managed to take down six of Africa’s Dangerous 7, which include the crocodile and hippopotamus.

4. There’s a Petition to Ban Her From Africa

Kendall Jones is an American born hunter who has entered the continent and has been hunting African wildlife under the facade of conservation. She has publicly stated that she hopes to have a television hunting show and she is using endangered and helpless African animals as a stepping to further her popularity on social media platforms.

She has already recieved much protest, peaceful or otherwise from a wide variety of people from all over the world on her social profiles, and has, on those platforms, visibly scoffed and shaken off those protests, claiming that protestors are misinformed, or simply the “sheep” to her “lion” morals.

With enough support globally we can take a step in the right direction with regards to animal conservation, and help put an end to practices such as these, in hopes of conserving what precious little is left of our natural world.

Jones is a sophomore at Texas Tech University in Lubbock, roughly five hours west of her hometown of Cleburne, Texas. She’s studying marketing and sports therapy and is a Texas Tech cheerleader.

She’s looking to host her own reality show in 2015, according to her Facebook page. 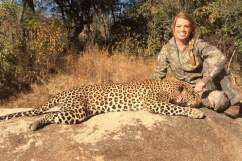 Kendall Jones Photos: The Pictures You Need to See