The 35-year-old is a producer, actress and television personality. Besides being a mom to a 7-year-old, she lunches with famous friends, has a clothing line, and even wrote a book.

As Carmelo makes his decision about what team to play for next season, let’s learn more about his wife.

1. She Says She Has a Say in Where Carmelo Goes

The Daily News reported that Carmelo is “torn” about whether or not to leave the Knicks.

In the video above, when TMZ asked his wife if she has any say in her husband’s decision, La La, whose maiden name is Vazquez, said, “Of course.”

As far as balancing her life with her husband’s basketball schedule, she told ESPN:

She might be taking a page from her book, The Love Playbook: Rules for Love, Sex, and Happiness.

The bestselling relationship guide teaches women about the mistakes that her and her friends have made. Advice such as “Love yourself first,” and “The ball is in the woman’s court,” are some of the quotes in the self-help book.

La La told ESPN, “…he kept telling me that Melo wanted to meet me. Then he introduced us. We were just friends for a while and then, it just kind of progressed from a friendship into a relationship.”

Before they were married, in March of 2007, they welcomed a son, Kiyan.

The family of three enjoys spending quality time together at home. La La told Latina magazine, “My husband, my son and I have the best time when it’s just the three of us. It’s nice to all be together, put a movie on, lie in the bed and laugh. That’s my idea of a perfect, fun time.”

In the Instagram photo above, which she posted on Father’s Day, she captioned:

Since 2011, Anthony’s played for the Knicks, and the family resides in New York.

LaLa dished to Wetpaint about what the like to do as a family in the city:

As a family we love to go for walks in Central Park…And of course Kiyan loves to play basketball like his dad.

On Kim’s website, she has multiple posts featuring outings with La La.

La La visited North West before her first pictures were even released. In an interview with Access Hollywood, she said Kim had taken personal pictures of her friends with Nori.

When Access Hollywood asked La La about the unique name choice, she said, “I think the name fits and as soon as you see the baby, that’s her name.”

In La La’s Full Court Life we follow the reality star as she balances life, work, and love.

Here is the show’s synopsis on VH1’s site:

In this series, we follow La La as she transitions from her relatively sleepy life in her sprawling Denver mansion to the hustle and bustle of New York City when Carmelo is traded to the Knicks. She must negotiate all the stresses that any move brings while keeping her brand new marriage and young son a top priority. Add to all of this La La’s acting career, which is just picking up steam as she attempts to transition from humble host to Hollywood hotshot. But despite her and Carmelo’s respective successes and an A-list lifestyle that keeps them in the company of some of the biggest celebrity names such as 50 Cent, Kelly Rowland, and Serena Williams, they remain a down-to-earth couple who have never forgotten where they’ve come from. Open and always willing to be real, La La uses her honesty, charm, and sense of humor to deal with the genuine ups and downs of her Full Court Life.

When they got married, La La’s Full Court Wedding aired, which followed the couple’s nuptials.

They married in New York City in 2010, with stars like Serena Williams, Spike Lee and LeBron James in attendance.

5. She Was Involved in a Basketball Argument Involving Cheerios

When the Anthonys were having marital problems, a basketball player used the opportunity to add some drama.

“Your… wife tastes like Honey Nut Cheerios,” said Kevin Garnett, a player for the Boston Celtics.

Besides having to be separated on the court, Anthony took the argument to the locker room.

In her book, she dispelled the rumor. “Kevin Garnett in fact had never said that I tasted like Honey Nut Cheerios. I tried to figure out how this big lie was turned into a media firestorm. I still can’t answer that one. Melo and Kevin are cool today. And now it’s nothing but a faint memory,” she said.

La La told Access Hollywood that the couple’s problems stemmed from the fact that he moved to New York:

I think a lot of the changes also happened when he got traded to New York. Now, you’re in New York City. It’s a huge city. Everybody wants him. He’s getting pulled in a million directions. 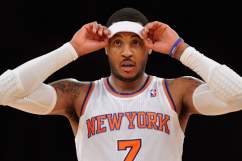 Carmelo Staying With Knicks? 5 Facts You Need to Know

Loading more stories
wpDiscuz
0
0
Would love your thoughts, please comment.x
()
x
| Reply
As Carmelo considers leaving the Knicks for a new team, meet the woman who has the most influence over that choice.