When he is not in the World Cup, he plays for Paris Saint-Germain.

As Argentina takes on the Netherlands in the World Cup semifinals on July 9, let’s learn more about the new heartthrob.

The 29 year old’s moniker translates to “The Chubby One.”
In fact, his Instagram name is even pocho22lavezzi.

He is known to plays pranks on his coach and teammates. After their win over Nigeria, he squirted his coach, Alejandro Sabella, in the face with a water bottle.

We know el Pocho and we know the personality he has. These things do good for the group, having a person like el Pocho who is always happy and in a good mood.

During his game last week with Nigeria, social media went wild when the camera cut to Lavezzi, shirtless and tattooed.

4. He Played in the Olympics

He was chosen for the Olympic team, representing Argentina.

She is no stranger to dating athletes and was once attached to Juan Martin del Porto.

5. He Has a Jesus Tattoo on His Chest

He also has a tattoo of Diego Maradona, a legend in Argentina. Lavezzi was hailed as “The new Maradona,” so fittingly made this body art choice.

In the picture above, you can see the drawing of a soccer player heading a ball.

This tattoo that he posted on Instragram is of a handcuffed alarm clock. 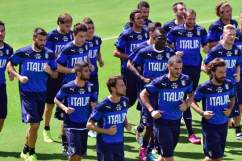