The Nets moved quickly to fill their coaching vacancy, hiring Lionel Hollins to succeed Jason Kidd as their head coach.

The Brooklyn Nets have reached an agreement in principle with Lionel Hollins to become the team's new head coach.

1. His Annual Salary Will Be in the $4 Million Range

The Brooklyn Nets are securing a multi-year contract that should be adding up to a $18 million contract. According to inside sources of ESPN . The deal was announced Wednesday, July 2.

2. The Bucks Got Jason Kidd For 2 Draft Picks

Bucks co-owners Marc Lasry and Wes Edens had a meeting with with Kidd on June 27, just a day after the NBA Draft.

The Milwaukee Bucks traded two draft picks in order to close a deal that would make Kidd the new head coach after firing Larry Drew. The Nets has previously offered Hollins a position as assistant coach to Kidd, but he wanted to wait for a head coaching job.

3. He Led the Memphis Grizzlies to Three Playoff Appearances in a Row

Hollins was said to have improved the team every year he coached in Memphis. He got them to 3 playoff appearances in a row and led them to 56 wins to advance to the Western Conference Finals in his final season.

The owners of the Grizzles did not renew his contract due to personal differences. The basketball world believes it was partly due to the management’s desire to modernize the program in relation to scouting and analytics in opposition to Hollins’ traditional style.

Hollins expressed his distaste for the decision in an interview with MyFoxMemphis saying:

I could take being fired. I could take them not wanting me. I couldn’t take them trying to destroy my reputation and credibility.”

I felt that I was wronged but it doesn’t matter Life isn’t fair.”

There are going to be people that after I get going won’t like me no matter how much success I might have. That’s just life.”

Glad Lionel Hollins is getting a new Head Coaching gig with the Brooklyn Nets! What happened to him in Memphis was preposterous.

4. He Served As an Assistant Coach For the Phoenix Suns Before the Grizzlies

5. His Son Was the University of Minnesota Point Guard

His son Austin Hollins played point guard for the University of Minnesota Golden Gophers from 2010-2014, finishing his college career with an average of 12.4 points per game. 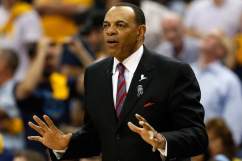 Lionel Hollins Photos: The Pictures You Need to See