Among the 27 Australian citizens on board the tragic MH17 flight from Amsterdam to Kuala Lumpur that was shot down over Ukraine were Maree Rizk and her husband, Albert. Maree Rizk was the stepdaughter of Kaylene Mann, a woman who just four months ago, lost her brother and sister-in-law on the disappeared MH370.

Mann’s brother, Rod Burrows, and his wife, Mary, were passengers on the disappeared flight MH370 back in March 2014. On July 18, one day after MH17 went down over Ukraine, Mann and her family, learned that her stepdaughter, Maree, was on board the plane. Maree was traveling with her husband, Albert Rizk. Mann’s brother, Greg Burrows, told the media “It’s just ripped our guts again.”

2. Her Stepdaughter Had Tried to Change Her Flight From MH17

Maree and her husband Albert both worked as real estate agents in close to the city of Melbourne. The Rizk’s had two children. They were coming to the end of a month long vacation in Europe and had wanted to change their flight so as to avoid a long stopover, reports the Brisbane Times.

3. Her Brother, Rod, Had Just Retired When MH370 Disappeared

The Australian Broadcasting Network reported back in March after MH370 went missing, that Rod and Mary Burrows were on board the flight. The Burrows were residents of the city of Brisbane. The couple’s son told the media that his parents had just retired and were traveling as they had always wanted to do.

4. Tributes Are Being Paid to the Mann Family on Facebook

Parents of Rodney Burrows on missing #Malaysianairlines flight arrive in Bris to be with family. @abcnews pic.twitter.com/Jae5OfwIJZ

One friend of Kaylene Mann, Andre McQueen, posted on her Facebook wall:

What a cruel twist of fate, who your family can be affected twice by Malaysia Airlines.

5. We Still Don’t Know All of the Nationalities of Those on Board

In total, there were 28 Australians on board MH17. After the 189 Dutch people on board and the 44 Malaysian people, Australians were the most numerous on board. 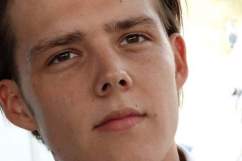