Mats Hummels, featured in an interview in the video above, is about to play the most important game of his international career as he and the rest of the German national team take on team Argentina for the 2014 World Cup.

2. His Current Club is Borussia Dortmund

Hummels plays as a central defender for Germany’s Borussia Dortmund, which is part of the Bundesliga, the top tier of Germany’s football system. He joined Borussia Dortmund on loan in 2008, but was fully signed to the club in February 2009. Before joining Borussia Dortmond, Hummels played for Bayern Munich from 2007 to 2009 and spent a year in the reserves at Bayern Munich II from 2006 to 2007. He worked his way through Bayern Munich’s youth program from 1995 to 2006. He signed his first professional contract on Dec. 19, 2006.

3. He Comes From an Athletic Family

5. He Has a Girlfriend

Hummels’ girlfriend, Cathy Fischer, was named Germany’s WAG of the Year in 2013. The two have been dating since 2007 and moved in together shortly after their relationship began. Hummels and Fischer did a joint photo shoot for the German edition of GQ in 2011.

Fischer’s Instagram features some gorgeous shots of her supporting her boyfriend in Brazil. Here are a few you need to see: 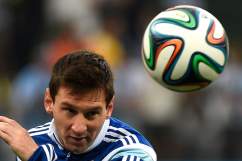 How to Watch Germany vs Argentina Live Stream Online

Read More
5 Fast Facts, Germany, Soccer, Sports, World Cup
Mats Hummels is about to play the most important game of his professional career so far as he and the rest of the German National Team prepare to fight Team Argentina for the 2014 FIFA World Cup.