Matthew Durham is a volunteer from an Oklahoma charity who the feds say confessed to raping HIV-positive orphans while on a humanitarian mission to Kenya.

1. Durham Volunteered for a Christian Charity

According to an FBI press release, Durham was a volunteer at the Upendo Children’s Home in Nairobi, Kenya’s capital.

The charity was founded by Eunice Menja, a woman from Durham’s hometown, Edmond, Oklahoma. The group, which describes itself as a Christian charity, lays out its mission as follows on its website:

To provide child-centered programs that prepare all children for a lifetime of learning, while families of those children are empowered to become self independent. The programs provide quality, comprehensive early and late child development programs and family services to meet the basic needs of low income population. One child at a time- while we envision a community with no more child poverty, no more child abuse but every child with each basic need met.

You can read the full criminal complaint below. WARNING: Page seven, section 15 contains vivid descriptions of the sex acts in question.

Durham had been a volunteer with Upendo since June 2012. Since then, the feds say he made four trips to Kenya to help out in the orphanage.

On his last trip, between April 30 and June 17, 2014, Durham insisted on staying in the children’s home rather than with a host family, the feds say.

He was housed in an “overflow bunk.” During that period, the feds say he had sex with as many as 10 children, ages 4 to 9, some of whom were were HIV-positive. According to the FBI, in at least one case, Durham had full intercourse.

Durham was arrested at his family’s home in Oklahoma and was held without bond after facing a judge on July 18. He faces another preliminary hearing August 1. If convicted, he faces life in prison. He could also face charges in Kenya.

Speaking to The Oklahoman, Durham’s lawyer, Stephen Jones, said his client was the victim of “some sort of pseudo-tribal psychological voodoo practiced on him.”

He said Durham was subject to “false imprisonment” and was delayed from leaving the country. He added, “I don’t think Hollywood could make up what happened at this so-called orphanage.” Jones said he’s investigating the area around where Durham was staying and that “It’s like some cult over there.” 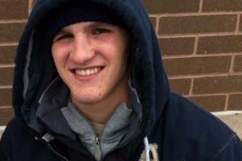 Matthew Durham Photos: The Pictures You Need to See

4. The Charity’s Director Described Durham as a ‘Wonderful Man of God’

Matthew Durham and his mother sleeping out to raise money for Upendo in March 2013. (Facebook)

On the now deleted Facebook page of Upendo Kids, Menja described Durham as a “wonderful man of God.” The same user adds:

Matthew your love for these kids is really amazing and every time you go an extra mile for Upendo kiddos, it brings joy into my heart.

According to a profile on the website for Crossings Christian School, Melissa Durham is a fourth grade teacher there, the profile adds:

Mrs. Durham and her youngest son (Matthew) enjoyed an amazing mission trip to Kenya the summer of 2014!

Matthew Durham’s father, Kyle, works for the Oklahoma City Fire Department. Matthew Durham is youngest of three brothers, Joshua is the oldest and Zachary is the middle child.

5. He Spoke Publicly About His Experiences in Kenya

Durham prior to his high school graduation in May 2013, pictured with his mother, Melissa, and father, Kyle. (Facebook)

In September 2013, Durham was invited to speak at his local rotary club about his aid work in Kenya. The article about the speech has been deleted from the Edmond Rotary Club website.

The rotary club said in the article that they contributed $500 to Upendo’s projects. The club also said that Durham was part of a group 30 adults and teens who went to Kenya. It also stresses how much the kids in Kenya loved to play soccer.

Matthew Durham Photos: The Pictures You Need to See

Loading more stories
wpDiscuz
32
0
Would love your thoughts, please comment.x
()
x
| Reply
Matthew Durham, a volunteer worker in Kenya, was arrested in Oklahoma, charged with raping HIV-positive orphans while he was on his humanitarian trips.