Richard Plotts has been named as the gunman suspect in the Mercy Fitzgerald Hospital shooting in Darby, Pennsylvania, reports NBC Philadelphia. The female victim allegedly killed by Plotts has been named as 53-year-old Theresa Hunt. According to her Facebook page, she was a Blended Case Manager at Mercy Fitzgerald Hospital and lived in Philadelphia. Plotts was charged with first and third degree murder of Theresa Hunt, as well as an attempted murder charge for the attack on Silverman.

1. Plotts Was Shot by a Psychiatrist

Plotts is suspected of shooting dead a female case worker inside the psychiatric unit of the Mercy Fitzergald Hospital. The gunfire broke out inside Dr. Lee Silverman’s office, the doctor was also wounded. It’s been reported that the doctor returned fire on Plotts. After being shot three times, Plotts is in critical condition in hospital. Philly.com reports that Plotts was shot twice in the torso and once in the arm. The doctor who shot Plotts is a 52-year-old psychiatrist at the hospital. Despite also being wounded in the attack, the doctor is expected to make a full recovery.

2. He Has a Long Criminal History

The Delco Times reports that Plotts has a long criminal history going back to the 1990s, he has three separate arrests for gun possession, drug possession and an assault in Philadelphia. Upper Derby Police Superintendent Michael Chitwood told the media:

In Upper Darby, he has been 302’d (committed to a hospital for psychiatric evaluation) on at least three occasions. The last one of the three was in January 2013. … He’s got a long history of guns and mental illness.

3. Plotts Had History at Area Hospitals

Plotts has psychiatric problems and has had previous incidents with hospital staff, reports ABC Philadelphia. Previously, Plotts had been a client of the Life Center of Delaware County but was kicked out for fighting.

4. We Do Not Know the Exact Motive For the Shooting

The female case worker who died in the shooting has not yet been named. She was Plotts’ caseworker, reports CBS Philadelphia. The exact motive for the shooting is unknown.

5. He Lives Close to the Hospital

Plotts is a resident of Upper Darby, Pennsylvania. 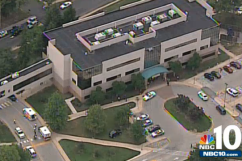 Loading more stories
wpDiscuz
17
0
Would love your thoughts, please comment.x
()
x
| Reply
Richard Plotts has been named as the suspect in the Mercy Fitzgerald Hospital shooting in Darby, Pennsylvania. Plotts is reported to have psychiatric issues.