A homeless man was arrested in New York City Tuesday afternoon when he threatened Michael Strahan repeatedly while wielding a knife. According to the New York Post, 25-year-old Andre Johnson pulled a knife on a security guard outside ABC’s Times Square studios, later saying he was “there to kill Michael Strahan.”

1. No one Knows Why Johnson Threatened Strahan

According to the New York Post, it’s unknown why Johnson threatened Strahan. He was tackled by a security officer outside of Good Morning America’s set, which features audience members huddled outside the hosts’ desk. The incident happened so quickly that surrounding audience members didn’t realize it had happened. Strahan is a part-time co-host of the ABC morning show. An ABC spokesperson told the New York Post, “It was a scary situation but thanks to the fast actions of NYPD the situation was quickly under control.”

2. Strahan’s Hosted ‘Live With Kelly and Michael’ Since 2012

Strahan was tapped to join Kelly Ripa as co-host of Live! With Regis and Kelly back in 2012, after Regis Philbin left the show in 2011. Strahan’s first guest host appearance was on Oct. 1, 2010. Since joining Live! the show has seen an impressive increase in ratings, and has out-rated its main competitor, the fourth hour of The Today Show by 87 percent.

Strahan’s professional football career spans an impressive 14 years all with the same team: the New York Giants. He was drafted in 1993 as a defensive end. Strahan was named All-Pro for five years of his career and tapped for the Pro-Bowl seven times. He was also named to the NFL’s All-Decade Team of the 2000s. Strahan will be inducted in Pro Football Hall of Fame next month as part of the Class of 2014.

4. Strahan’s Been a Part-Time Host on Good Morning America Since April

5. Johnson Was Charged With Assault

According to the New York Post, Johnson was charged with felony attempted assault, menacing and criminal possession of a weapon. Johnson had multiple outstanding warrants from different states and was likely to be held without bail, according to a clerk. 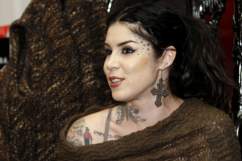