With the MLB non-waiver deadline less than a day away, there is chaos within the world of baseball. Questions have been raised and unanswered as we wait to find out where Boston Red Sox pitcher Jon Lester and the Tampa Bay Rays’ David Price will end up.

1. The Trade Deadline is July 31st

Those who are about to be traded are often taken out of games and the lineup in order to ensure said player doesn’t get injured in the meantime which has led to the rumors flying around but has confirmed certain others including Lester’s future after an announcement saying he was taken out of the game tonight against the Toronto Blue Jays.

Any team looking to trade after the deadline must sign a waiver and then have the buyer or seller sign one in return.

2. There are More Buyers Than Sellers

Now that there are 8 teams in the running for the wild-card spot in the American League and 5 in contention for the National League, more teams are expecting to have a chance at the second wild-card spot. This causes the buyers to be much higher than those who are trying to sell in such a situation.

So many teams are in it that the buyers greatly outnumber the sellers and for that reason the sellers are asking for crazy-high prices, so nothing is happening.”

Although the teams that think they have a chance at the spot know that it is beneficial to trade earlier than later, they still wait last minute because sellers are waiting for a great deal to come along that usually doesn’t. The supply and demand is out of wack causing the trades to go in different directions than one might think.

3. The Indians Already Traded Justin Masterson to the Cardinals

After a disappointing season with the Cleveland Indians, they decided to trade him to the St. Louis Cardinals today (Wednesday). In return, the Indians got James Ramsey who was a no. 23 overall pick by the Cardinals in the draft. Ramsey plays in the outfield with a .300 batting average, 13 homeruns and 36 RBIs.

Masterson has not yet moved off the disabled list but is due to come off of it by the end of the week. There is speculation that more trades from the Indians will occur now. Cleveland is in the running against 5 other teams for the wild-card spot this season.

4. John Lester Will Not Be Re-Signed By the Red Sox

Since Lester’s contract is done at the end of this season, there have been rumors of his trade. The rumors were true and as of less than 24 hours before the trade deadline, the Orioles are close to signing a deal with the Red Sox for h8im. Red Sox executives previously spoke of wanting to keep the lefty pitcher in Boston, but talks of an extension broke down earlier this year after the team made what many considered a low-ball offer of four years and $70 million.

Lester’s trade will be ending one of the most successful pitching tenures in the Red Sox’s 114-year history. It looks like John Lackey is also on his way out from defending Fenway.

Earlier this week, the Boston Globe’s Pete Abraham reported that Sox executives heard what it was going to take to re-sign Lester and started actively shopping him.

Also, the source said the Red Sox “won’t be stubborn about (trading Lester) within the division,” with both the Orioles and Blue Jays reportedly having expressed interest in acquiring him. The Red Sox might even be compelled to trade Lester to Baltimore or Toronto, though not the Yankees, because they can extract top prospects from those teams while feeling reasonably confident that he won’t re-sign with either of them.

5. David Price Will Most Likely Stay With Tampa Bay

As a free agent, Tampa Bay’s pitcher David Price is constantly coming up when it comes to trade deadlines. It is not positive whether or not he will leave the Rays, but mounting evidence has shown he is probably going to stay put.

One clue is that Lester who is most definitely getting traded was not put in the lineup for the Wednesday game while Price was. Also, now that the Cardinals took Masterson, they are less likely to trade for Price.

So could you imagine him going out there, striking out 15, winning and then they trade him? That would be really, really hard to do.”

Price will be trying to make history tonight as will try and pitch a game that gives the Rays a 54-54 record. The Rays have had 11 wins in their past 12 games to bring them one win away from .500 after recovering from 18 games under .500. If they win, they will be the fourth team in history to come back from such a deficit. 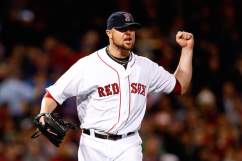 Read More
5 Fast Facts, Baseball, Boston Red Sox, MLB, Red Sox, Sports
With the MLB non-waiver deadline less than a day away, there is chaos within the world of baseball. Where will Lester and Price go?