Nadine Gordimer on racismHere, she describes her escape from the racist ideology she had grown up with. Full interview at nobelprize.org/nobel_prizes/literature/laureates/1991/gordimer-interview.html2007-10-03T11:34:46.000Z

South African Nobel-Prize-winning author Nadine Gordimer, seen in the video above, died in her home in Johannesburg Sunday evening. She was known for her novels and short stories which dealt with the harsh realities of apartheid in South Africa and the problems the nation faced after apartheid’s end. She was 90.

2. She Published Her First Work When She Was 15

Gordimer’s first published work, “The Quest for Seen Gold,” was published in the Children’s Sunday Express in 1937. She then published another children’s story called, “Come Again Tomorrow,” that same year. Her first work of adult fiction was published when she was 16. She can be seen reading one of her short stories, “Loot,” in the video above.

3. She Got Involved in the Anti-Apartheid Movement in 1960

The arrest of Gorimer’s best friend, Bettie du Toit, coupled with the Sharpeville Massacre in which 69 people died and 180 were injured, inspired her to join the anti-apartheid movement. She became active in South African politics and befriended Nelson Mandela’s defense attorneys during his 1962 trial. Apartheid was a government-maintained form of segregation that severely limited the rights, associations and movements of South Africa’s black inhabitants. Apartheid was established by the South African government in 1948 and came to an end in the early 1990s, leading to Nelson Mandela’s presidential election in 1994. After apartheid, Gordimer believed her writing wouldn’t have been very political if she had lived anywhere else in the world, saying, “I am not a political person by nature. I don’t suppose if I had lived elsewhere, my writing would have reflected politics much, if at all.”

4. She Edited Nelson Mandela’s Famous I Am Prepared to Die Speech

Gordimer helped edit Mandela’s famous, “I Am Prepared to Die” speech, which he gave from the dock of the defendant at the Rivonia Trial, in which Mandela and nine other African National Congress (ANC) leaders were charged with sabotage. The speech was three hours long, and upon Mandela’s release from prison in 1990, Gordimer was one of the first people he wanted to see.

5. She Was an HIV/AIDS Activist

In the post-apartheid 1990s and 2000s, Gordmier was active in the fight against HIV/AIDS. She wrote a piece of short fiction called “Telling Tales” as a fundraiser for the South African Treatment Action Campaign. She also criticized former South African president Thabo Mbeki for his stance on AIDS, noting that she had approved of all of Mbeki’s other policies. 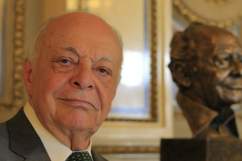