The owner of Elvis’ shrine “Graceland Too” in Holly Springs, Mississippi, Paul McLeod, was found dead in his home on the morning of July 17, reports WREG. His death comes just two days after he shot a man, Dwight Taylor, dead at his Elvis museum.

1. McLeod Was Found Slumped Over On His Front Porch

McLeod’s death appears to be from natural causes. The Daily Journal reports that McLeod was spotted on the front porch of his home at around 7 a.m. on July 17. The Elvis fanatic was slumped over.

On July 15, McLeod shot a man, Dwight Taylor, dead at “Graceland Too.” The man was allegedly trying to force his way into the home and had broken a front window. Police chief Kevin Buck told the media:

There seems to have been a home invasion and the resident of that house felt that his life was in danger and took action to protect themselves as far as we know.

3. He Was Not Expected to Face Charges Relating to the Shooting

McLeod had been taking in for questioning regarding the shooting but was released without charge.

4. Taylor’s Mother Says Her Son Was Just Looking For Money He Was Owed

Taylor’s mother, Gloria, was outraged about the shooting and claimed her son had gone to McLeod’s home to collect money he was owed for painting “Graceland Too.” Speaking to WREG, Gloria Taylor said ““All we want to know is why, why did he do it and nobody’s telling us anything.” Dwight Taylor was known around Holly Springs for performing odd jobs and was also known as a blues musician.

McLeod, an eccentric Elvis fan, was famous throughout Mississippi for his “Graceland Too” museum. He claimed to drink 24 cans of soda a day, which aided his 24 hours a day opening policy. McLeod performed every guided tour of the museum. “Graceland Too” had been known as Holly Springs’ main tourist attraction.

Paul McLeod allegedly shooting a man last night is horrifying when I've been to Graceland Too absolutely hammered.. 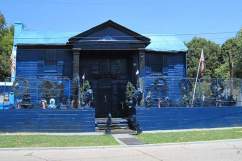