Polly Samson sent out this tweet that had social media a buzz with news of a new Pink Floyd album. The band is not happy with her disclosure, according to Straight.com.

Btw Pink Floyd album out in October is called “The Endless River”. Based on 1994 sessions is Rick Wright’s swansong and very beautiful.

Her husband is the band’s guitarist and vocalist, David Gilmour. They met at a dinner party, and Samson thinks he fell in love with her because she was uninterested in his fame.

They married in 1994, and Samson became a stepmother to the four children Gilmour had with his ex wife, Ginger.

Ironically, he said, “Yup, she’s very nervous of being the Yoko/Linda McCartney [figure].”

2. She’s Written Songs for the Band

She’s a journalist and author of two short story collections and one novel.

With her husband, she co wrote the lyrics to seven tracks on Pink Floyd’s album The Division Bell. The album met with great success and went to number one.

She also collaborated on the album titled On an Island. In a 2012 interview with High 50, Gilmour said:

The other day, Polly and I listened to On An Island [his latest solo album] like that, for the first time in about three years, and we thought it was brilliant. We’re so modest…

She and Gilmour have three children. Sons Joe and Gabriel were born in 1995 and 1997 and their daughter, Romany, was born in 2002.

She also had a son, Charlie, with poet Heathcote Williams prior to her union with Gilmour.

Soon after her son was born, her relationship with Williams ended and she was unemployed, homeless, and broke.
“I couldnt see any way out of my situation. I honestly didn’t know how I was going to survive,” she told the Sunday Telegraph.

Charlie was adopted by Gilmour.

4. When Her Son Was Imprisoned, She Tweeted

According to the Daily Mail, her son, Charlie, was jailed for 16 months after showing the “ultimate disrespect to Britain’s war dead by swinging from the flag on the Cenotaph.”

Charlie had taken LSD, Valium and whisky before he committed the crime.

Samson, a supportive mother, sent these tweets while her son was in jail:

Letter from son still locked in 23 hours a day.

Pickpocket has offered tutelage but shortage of pockets on prison uniforms.

He seems to be coping remarkably well despite being locked in 23 hours a day.

Samson wound up getting hate mail. The Daily Mail reported that when asked why she’d been targeted, she replied, “Apparently for accompanying my son to court instead of having him aborted 21 years ago.”

As a writer, Samson knows people must doubt her work.
“I am sure people may think, ‘Who is this dilettante rock-star wife who is dabbling in fiction?'” she told the Sunday Telegraph.

However, she has earned acclaimed for her work, with even Oprah selecting her novel for inclusion in a 2011 book list.

This review for the novel is up on Oprah’s website: 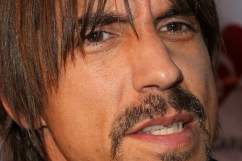