A married couple died in their Pennsylvania home after it exploded early Tuesday morning.

Ray, 74, and Janet Trautvetter, 69, died in their home after it exploded just after 4 a.m. on July 15. Debris from the explosion landed up to a quarter mile away from the home. It’s believed the explosion set off ammunition inside the home.

1. The Blast Was Heard Several Miles Away

This is what's left after a house explosion killed two people in South Beaver Twp this morning. More @ noon on #WPXI pic.twitter.com/bo4IvNpA2y

South Beaver Police Chief Dan McLean told CBS Pittsburgh the department received multiple calls because of the volume of the explosion, saying it was heard several miles away.

2. The House Went up in Flames

Peter Sergi, the couple’s neighbor, told the Beaver County Times thought lightning had hit the house upon hearing the explosion. When he smelled smoke, he and his son ran up the street to discover the Trautvetter’s home engulfed in flames. The fire reached the trees above the home, but quickly died down.

3. The Explosion Was Most Likely ‘Gas Related’

Cops told WTAE the explosion “probably is going to be gas-related.” The home used propane as fuel. A state fire marshal is investigating the cause of the explosion at this time, according to CBS Pittsburgh.

4. Janet Trautvetter Ran a Catering Business out of her Home

This is the home at address 419 Louthan Road, which is listed by the Beaver County Times as Ray and Janet Trautvetter’s home. (Google Maps)

5. Autopsies Were Scheduled for Later Tuesday

#Breaking News: Sky 4 shot of a house explosion in South Beaver Township killing a man and a woman. @wtae pic.twitter.com/h7xQrGrvgV

According to WTAE, autopsies on the Trautvetter’s bodies were scheduled for later Tuesday. 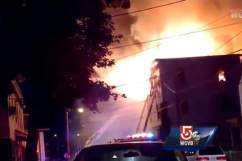